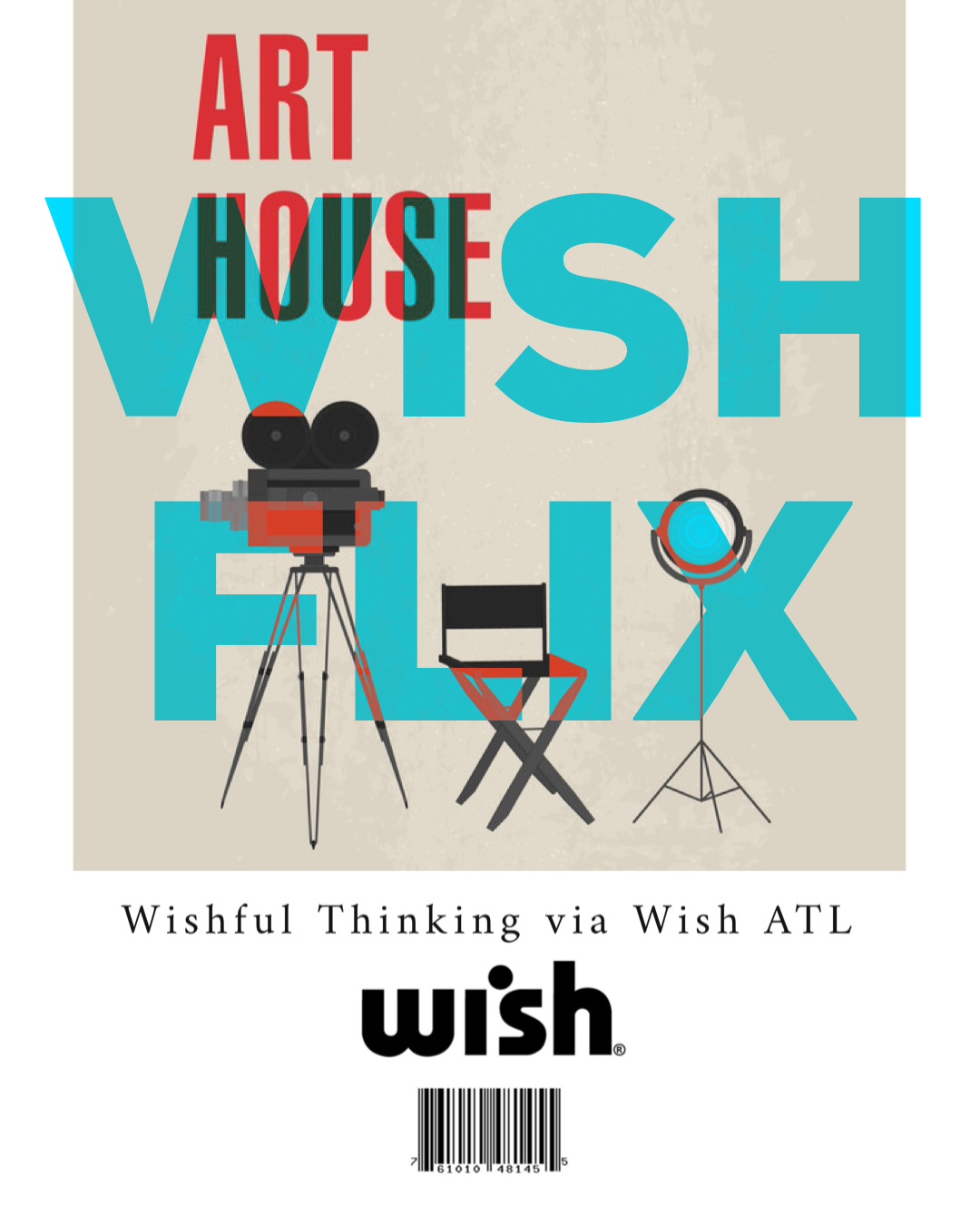 Art House is a genre of film encompassing films that have distinct artistically experimental style and content. These types of films are typically serious, feature lesser known actors & independently-produced due to the niche market appeal of the content. These films typically go on to be premiered at special theaters & film festivals like Sundance, Cannes & SxSW. As we continue head into World Art Day on April 15, this week’s WISHFLIX takes a look into some popular Arthouse films and features some accompanying looks from our shop-able Art-Inspired Collection!

Eternal Sunshine of the Spotless Mind (2004)

A tale of a failed relationship in which the two lovers decide to have their memories of the other erased, only to run into each other again. The look inspired by this story has to be the perfect first, and last, date outfit. A shirt featuring the instantly recognizable CDG heart logo seemed the best choice to pop in this fit. The DDM shorts and denim overshirt are a nod to the coastal, Montauk, New York setting of the film. Vans Sk8-Hi sneakers, a bright chartreuse Carhartt WIP bucket hat, and Grace by Grace Bennington fragrance bring together the playful, romantic, and reflective tone of both the outfit and the movie.

The story of a woman who loses her memory in a car accident, then receives aid from a Hollywood hopeful. David Lynch’s 2001 neo-noir film is less about it’s characters and their motivations and more about the allure of Hollywood stardom. Dreams can be made and broken. This mood is reflected in the look featuring a Chinatown Market Cry button up shirt with an image that could have been taken the movie itself. Styled with a baggy, loose cut Noon Goon No Doubt pant, an attention grabbing fuchsia Stussy beanie and Adidas Terrex sneaker. This look just screams Hollywood’s next it kid.

It would be wrong for an outfit inspired by a film featuring hallucinations and out-of-body experiences to not feature tie dye and this look does not disappoint. A MISBHV patched and tie dye tee are paired with a Stussy tie dye short for a disorienting patterned blocked look. The patch-dyed style of the shirt is in a similar spirit to the cinematography style of the Gaspar Noe’ directed film, which is virtually all overhead and POV shots. Chinatown Market yellow-lensed smiley glasses and a Stussy cuff beanie keep with the feel of the fit and the main character’s *ahem* lifestyle. The Vans Ultrarange Exo LX sneaker was  made in collaboration with BILLY’s, a retailer based out of Tokyo, the main setting of the film.

A cult classic psychological thriller starring Jake Gyllenhaal as a troubled teen who follows the voices in his head to great lengths. Is he a savior to humanity or is he out of his mind? The outfit inspired by this film needs to also have equal parts, teen angst and savior complex. Pleasures relax fit denim jeans featuring the word “DESTROY” down the hip and “I DIED FOR YOUR SINS” on the opposite knee fit the bill perfectly. A black long sleeve Maharishi “2020 Vision” tee also tells people, “I see the full picture, even if you cannot.” A simple green Stussy dad cap and Adidas x Pharrell Williams Campus sneaker tone down the look for a very wearable look that is effortlessly cool, like the film’s titular character.

Brick is a neo-noir film, starring Joseph Gordon-Levitt and set in a California suburb. What does a high school hardboiled detective wear while taking on criminals and searching for a person in danger? Probably the same thing you would wear in California anyway, but darker. Carhartt WIP carpenter pants, white Stussy striped socks and black Vans Slip Ons. The Denim Jacket, White tee and sneakers are all pieces from the Vans x Jim Goldberg collection. A collection with a similarly dark and gritty tone to that of the film. And the Stussy beanie tops the look off because a detective needs a good hat. 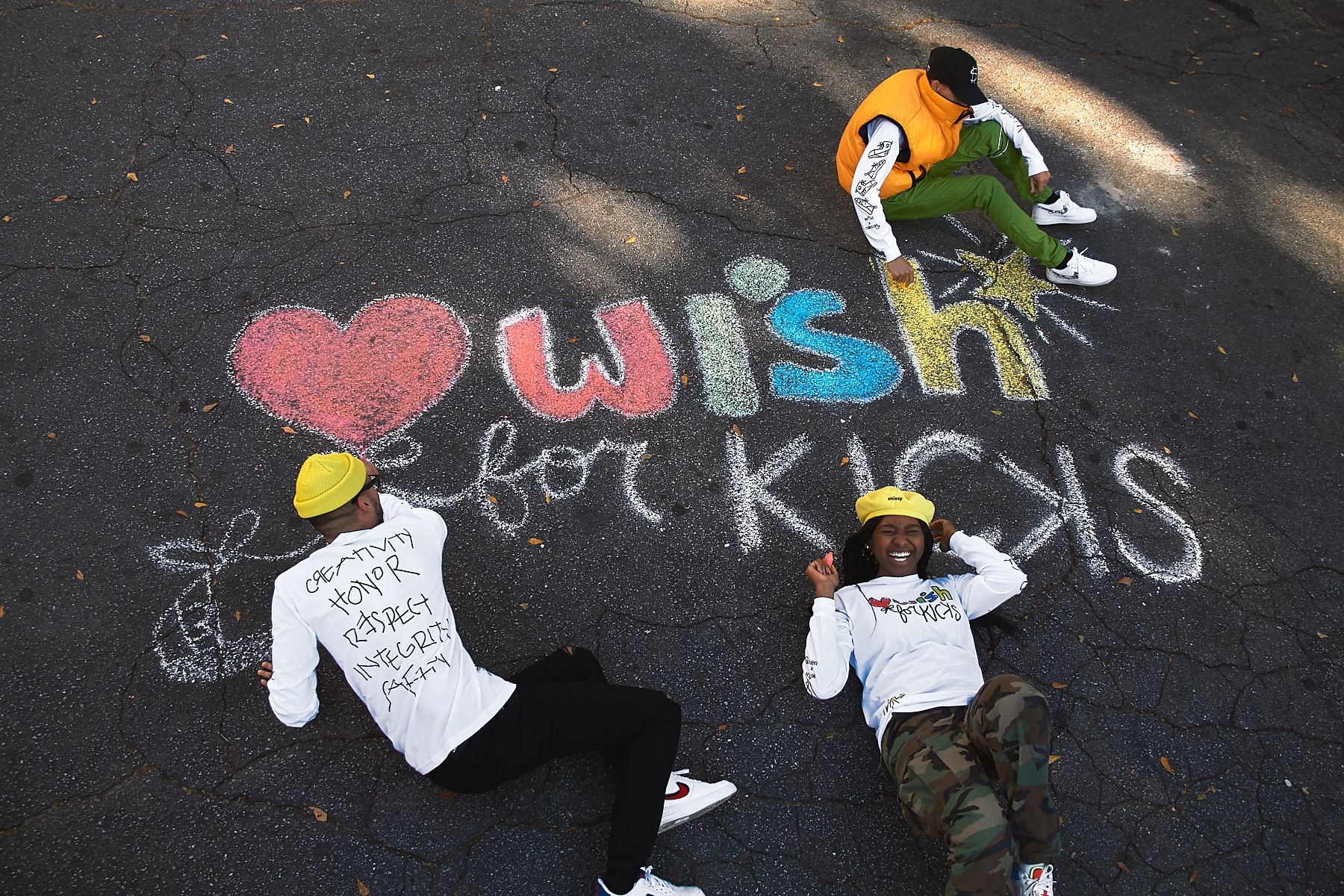 #NOWAVAILABLE @wishatl // #WishForKicks ‘Giving Back’ L/S TEE | $59 | IN-STORE + ONLINE ❤️ It’s always the season to give back! Our goal is to provide a pair of sneakers from Wish for each child & teen in the organization for the Holidays.

We added a new and fun way to give back! Cop a #WishForKicks Tee as an option to donate!
100% of the purchase will go towards a fresh pair of kicks for each teen/young adult at Chris180.

Written by Julie Hogg on August 8, 2013. Posted in Lifestyle, Product.

In our quest to further examine the progression of Hip Hop, we’re continuing to explore Hip Hop’s core elements. Our next subject is Brandon Sadler, an artist who got his start in street art and is now growing a body of art in the contemporary collection of the High Museum. Sadler’s work can also be seen throughout Atlanta including his work along the Atlanta Beltline which is showcased in the images below. So take a look below as Brandon talks about his craft and models another one of the looks from our “Moreland Marauders” capsule:

Explain what doing your craft is like in today’s society with the advancement of technology, the internet, digital downloads, availability of information etc.? Do these elements prove as aids or obstacles?

I keep both doors open really, I stay true to a hands on approach and utilize the digital world as a tool and network. I prefer to work analog but the cyber tap is inevitable at this point, and it does allow a level of accessibility and impact that conventional approaches can’t provide. Successfully creating in today’s world requires balance, so in order to avoid succumbing to any one particular medium; I sharpen many techniques on the regular.

How has your craft changed since the inception of HipHop?

Well Hip Hop had already erupted by the time I was born in 86’, so what I became and what I do now is reflection of decades of Hip Hop influence.  My style is a symphony of different cultures and disciplines and it will develop continuously; the ability to observe, adapt, and master is the essence of Hip Hop culture.

How does your craft influence HipHop today and vice versa?

I can’t speak on my influence on Hip Hop. Its influence on me however, has been based in progressive forms of creativity, language, innovation, transformation, and style; I have shaped my artistic career on these principles.

For more information on Brandon Sadler or to see some of his work, visit http://www.risingredlotus.com/

American artist Mike Kelley is the type of creative mind who has the ability to create works that seem to withstand the test of time. Unlike some whose works are based upon an era-specific trend or a fleeting fad, Kelley’s work – perhaps by virtue of its inherently humanistic approach – possesses a timeless value to it. Often pulling upon found objects to comprise his sculptures, one of Kelley’s most celebrated pieces is the one pictured here – City 0000. Currently on display at a group exhibition at New York’s David Zwirner Gallery, City 0000 poses a bright and bold contrast to the stark white walls and smooth concrete of the open space.

City 0000 depicts the fictitious city of Kandor, the birthplace of Superman on the planet Krypton. Cast in a bold, chromatic series of colors, City 0000 is made up from a translucent resin and lit by interior LED lights and the skyline is comprised of a glowing grouping of obelisks, towers, and pillars. Holding a particularly personal and special place within Kelley’s mind, Kandor reckons to his childhood in which – according to DC Comics – Kandor was a world that was miniaturized and stolen before Krypton was destroyed. For attendees of the group exhibition, City 0000 holds an even deeper value in light of Kelley’s recent death, bringing to light the melancholic juxtaposition of Kelley’s childhood imagination on display and the finite reality of the human life.

To say that American artist Jeff Koons is one of the most celebrated and successful artists of our day, would be an understatement. Not only has the Pennsylvania-born artist been pushed to the forefront via his individuals works through the years such as Puppy, Celebration series, his BMW Art Car and many, many more, but Koons has maintained a level of longevity and consistent relevance that is perhaps the harder facet of one’s artistic career to maintain. The latest work from Koons – appropriately titled Gazing Ball – is now on display and being housed within New York’s David Zwirner. Gazing Ball represents Koons inaugural exhibition with David Zwirner. While here in New York, we’ve been stooping through a series of galleries and creatives spaces — one of our first stops being Koons’ latest exhibition.

Koons, who often gathers much of his creative inspiration from various elements of contemporary consumer culture and modern everyday life, initiated Gazing Ball out of a retroactive look back at the mirrored spherical ornaments often found in suburban lawns in Koons childhood hometown of Pennsylvania. A relatively simple concept at first, Koons uses the spheres to explore the concept of trascendence while reflecting on the perspective of a phiiosophers gaze on life, mortality and the concept of eternality through form and ideas. Each blue-colored, hand blown gazing ball rests atop a variety of Greco-Roman antique statues that are juxtaposed alongside elements from modern society such as mailboxes and a birdbath. The concept is to present the time-and-date-centric elements of various eras against the gazing balls which seems to slide seamlessly into whichever period-setting they are displayed. Jeff Koons’ Gazing Ball will be on display at David Zwirner through June 29, 2013.

For all the creative art loving sneaker fans, we’ve go a treat for you.

Creative Director of Happy Socks,
Viktor Tell, teams up with adidas
Originals to create his own fun
version of the Matchplay. From the
outside the silhouette looks low
key with its mostly white canvas
upper, but it’s the small glimpses
of detail on the heel tab, ankle
padding and inside the shoe that
tell both the Olympic and Happy
Socks stories.

The Stockholm native took
inspiration from a Swedish air
pistol champion, and this
is achieved along the 3-stripes
with bullet hole inspired dots.
On one of the sockliners is a
Trefoil target marked LUFTPISTOL
(air pistol) and the other features
a lid for bullets. The ankle
padding and underside of the
tongue feature more brightly
coloured dots that make it
characteristically Happy Socks.

Perhaps one of boldest
interpretations for Consortium
SS 12 and one with some
serious attitude is the Pro Shell
by Kara Messina, London designer
and creative director of men’s
streetwear label Y’OH. There’s
a strong synergy with Messina
and the Pro Shell model; each
has carved their own place
in streetwear history.

Most of the upper is made
of engineered fabric with
a traditional African print in
leopard colours, and for Messina
this conjures thoughts of
competitiveness and the multi
cultural presence in both
Olympics and everyday London
life. The print continues through
to the laces and velcro strap, while
the rubber toebox and supersoft
leather heel patch and side panel
tone it down slightly in black.

What do you think about this story? Like the art? Let us know in the comments section.

Written by Julie Hogg on January 28, 2011. Posted in Events, Lifestyle.