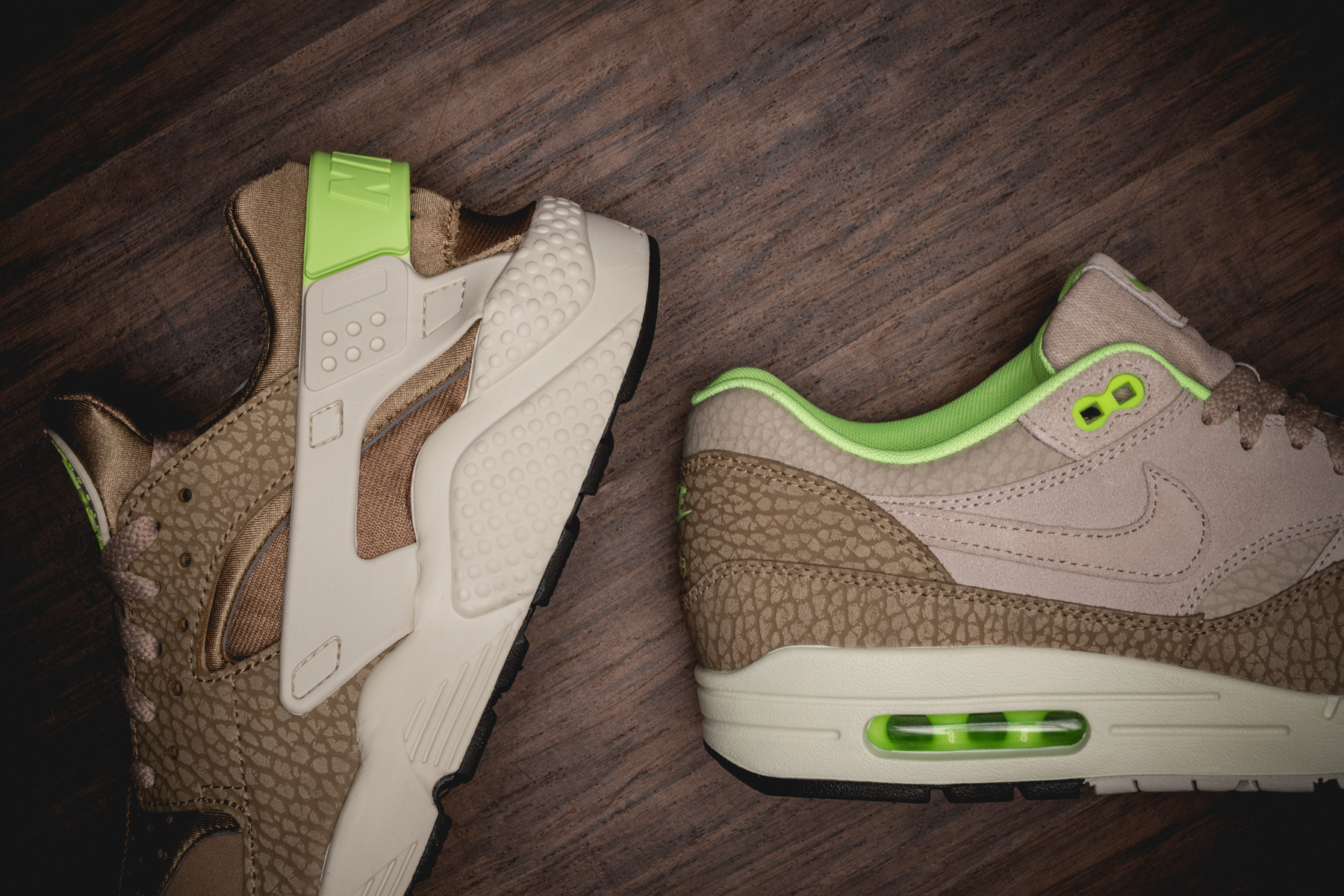 Air Max Day may have passed, but that doesn’t mean Nike isn’t finished releasing dope Air Max renditions. Utilizing the Air Max 1, Nike gives it an elephant/safari treatment. Sticking to premium materials with a suede and leather upper, the sneaker is treated with hues of brown, and accented with neon lime. Also included is the ever-popular Air Huarache, receiving the same color make up. Both sneakers are now available phone order or in-store at our Moreland Ave. location. 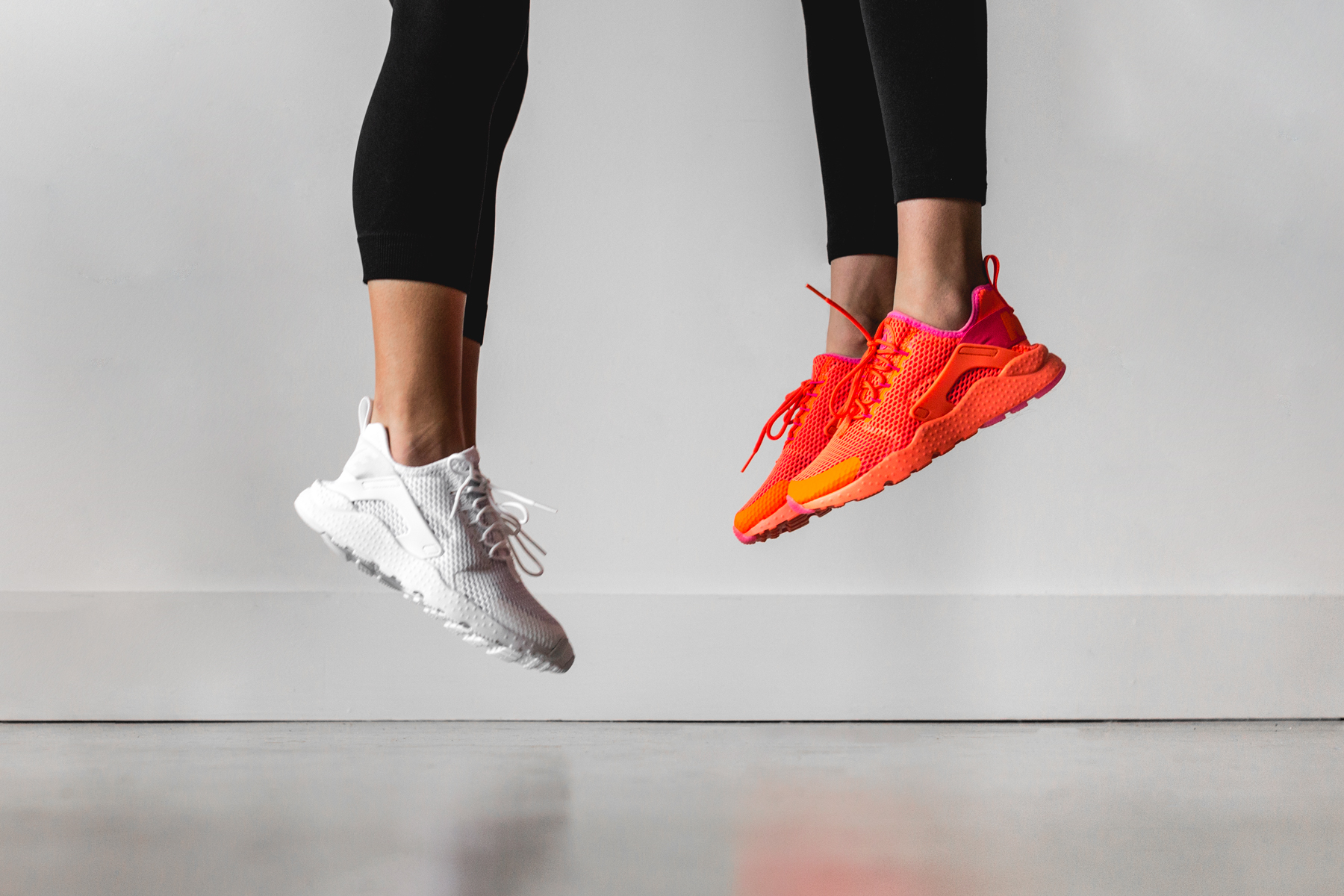 The latest from Nike comes in the form of a unique Air Huarache for the ladies. In a more stripped down, mesh-like material, Nike delivers two new colorways for their “Ultra” version of the Air Huarache, white and total crimson. Both sneakers come in a single tone, with extra color detail coming in pink on the sock liner for the total crimson. Both sneakers can now be picked up in-store at our Moreland Ave. location. 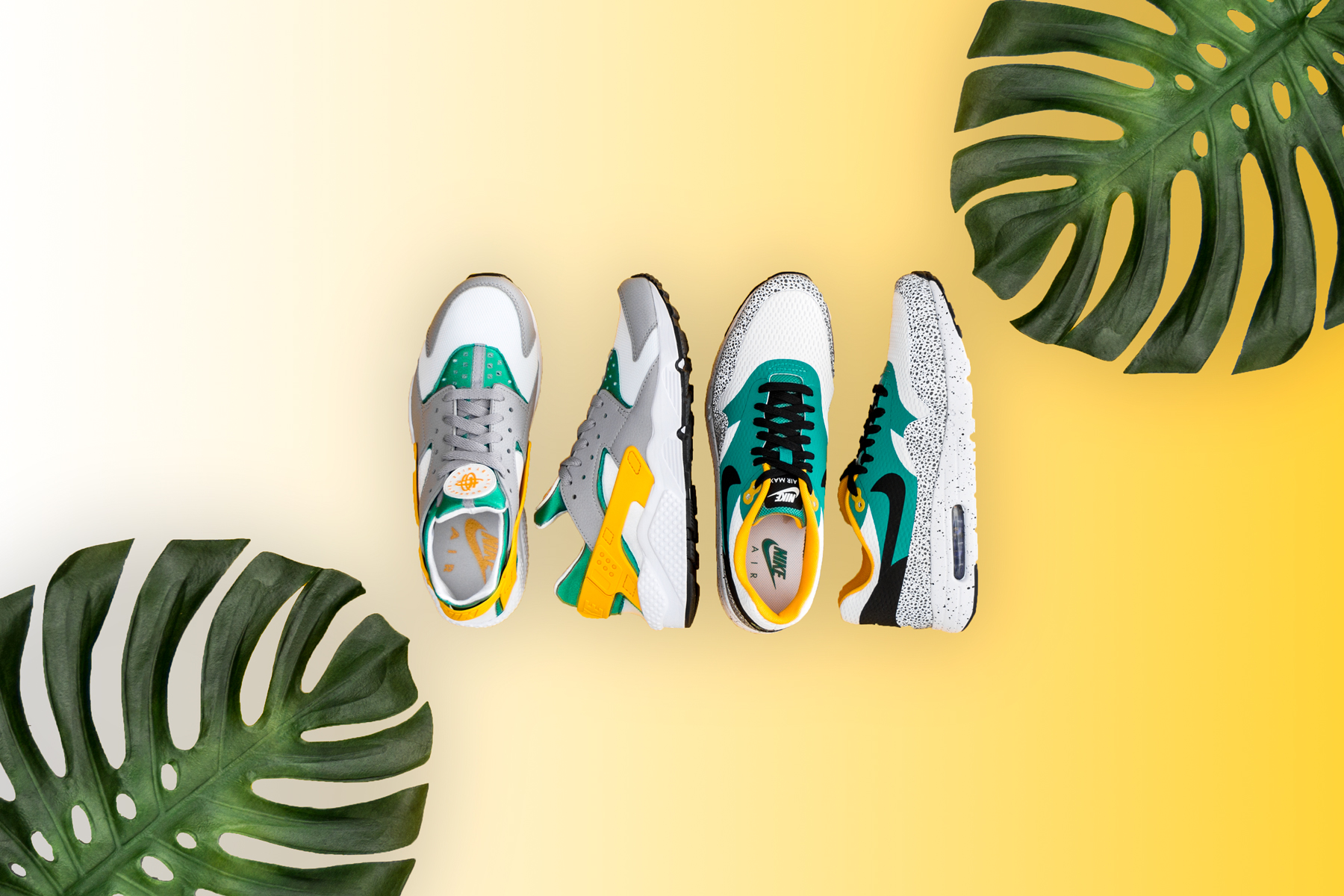 Nike continues on with their onslaught of Air Huarache releases with this beautiful new colorway inspired by Tinker Hatfield’s alma matter, the Oregon Ducks. Hatfield’s famed Air Huarache design has seen nearly every make up you can imagine, and although Nike ID offers some wonderful color combinations, Nike continues to pump out unique and impressive color combinations. Also highlighted here is an all new Air Max 1 featuring a similar set of tones, with its green and yellow hues, and bringing back popular safari print to the silhouette. Both sneakers are now available for purchase by phone order and in-store at our Moreland Ave. location. 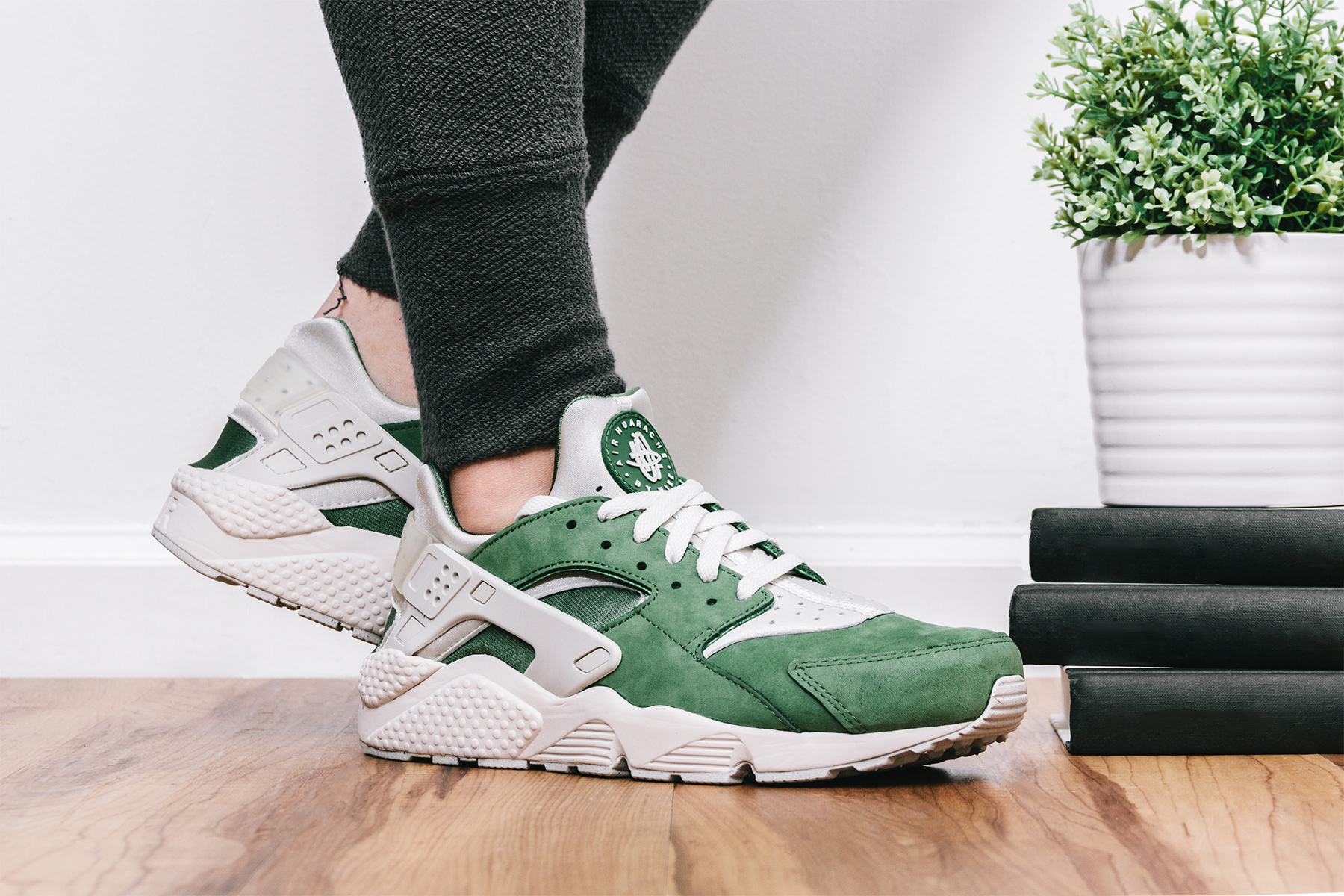 Written by Julie Hogg on January 5, 2016. Posted in Product.

Just when you think Nike has already ran out of amazing color combinations for their Air Huarache, they impress once again. This time around, Nike keeps things clean and simple with this a clean green upper dubbed “Treeline”, whilst a light bamboo color makes up the mid-sole. Wrapping the silhouette is its premium suede which helps to complete the sneakers premium look. Stay tuned for the “treeline” Air Huarache to be released in a few days.

All red sneakers are great way to add a pop of color to any wardrobe and this pair of sneakers from Nike is no different. Utilizing Nike’s Air Huarache and Air Max Thea silhouette’s, both sneakers feature varsity red inside and out. For the Huarache, Nike sticks to a combination of leather, nylon, and spandex for a quality look and appeal. As far as comfort, the Huarache features the classic Air Sole unit in the midsole, ensuring comfort for all uses. The Air Max Thea makes use of a different set of materials, such as mesh and rubber, and also features the Air Sole unit similar to the Huarache. Both of the monochromatic sneakers are now available in-store at our Moreland Ave. location.

Yet another colorway of a Nike classic is set to hit the shelves of the Wish library. This time, we received an exclusive run of the Women Air Huarache, which has been iterated with a very clean combination of “Wolf Grey” and “Crimson” hues for the spring. The neoprene and mesh upper offers undeniable breathability for the warming weather, while the white midsole adds a clean, timeless feel to this pair.

Nike has dropped off a new and enticing colorway of the Air Huarache this month. The Swoosh favorite has been comprised of mesh, neoprene and synthetic materials, as this particular pair features a grey, black and crimson color combination. A white midsole breaks things up underneath, with red laces completing the pair.

The Nike Huarache line has had a major year in 2014. Closing out the year, Nike Sportswear is doing something special for the ladies with the release of the Women’s Nike Air Huarache Premium in all Metallic Silver. The Silver theme is carried across the upper and all the way down to the sole with metalic flakes fused into silver rubber. Available 12.19.14 in-store at our Moreland Ave. location and by phone orders.

Having successfully created a basketball rendition of the Huarache, Hatfield and Avar set out to create a cross-training shoe as well. The upper utilized a similar exoskeleton-innersleeve combination—with one addition. Recognizing the need for superior lockdown during resistance training and aerobic activities, a mesh strap was added, giving birth to boundary-smashing performance footwear.

Originally designed to combine the functionality of South American sandals and the fit of neoprene water ski boots, Nike’s “Fab Five” popularized Air Flight Huarache is set to make its return this fall in proper OG form. One of the fruits of 1992 collaboration between Tinker Hatfield and Eric Avar, the shoe combines OG colorways, neoprene sockliners, and an outer exoskeleton for breathability. A throwback piece of the ’90s sneaker history, the Air Flight Huarache is now available in-store or by phone order.

Written by Julie Hogg on January 7, 2014. Posted in Product.

Decades later, the Swoosh has decided to recitalize the old school sneaker. Taking on a Phoenix Suns-inspired color scheme, the pair sees an overhaul of purple, black and orange take over the mid-top profile, with the speckled midsole and tribal print provide retro sensibility throughout.  Be on the lookout for the Nike Air Tech Challenge Huarache “Phoenix Suns” coming soon at Wish.

Some big releases are scheduled for February and The Huarache Volt is kicking it off right! The Volt colorway is back again for the Spring since its predecessor the Nike Air Max 90 “Volt” earlier this month. This Nike Air Huarache Free Basketball is a good take on the ever so popular Original Nike Air Huarche. The shoe is mocked up in an all white combination with leather uppers and Volt hits amongst the inner foot area and a black ankle hit. The sole is consisted of the super comfortable Nike Free sole with a black midsole that wraps from one side to the other. The Nike Air Huarache Free Basketball 2012 will be dropping next Wednesday 02/01 for a retail of $115 USD. As always Phone orders will be welcome after 5:00PM est on the day of the release by dialing extension #2 at 404.880.0402.