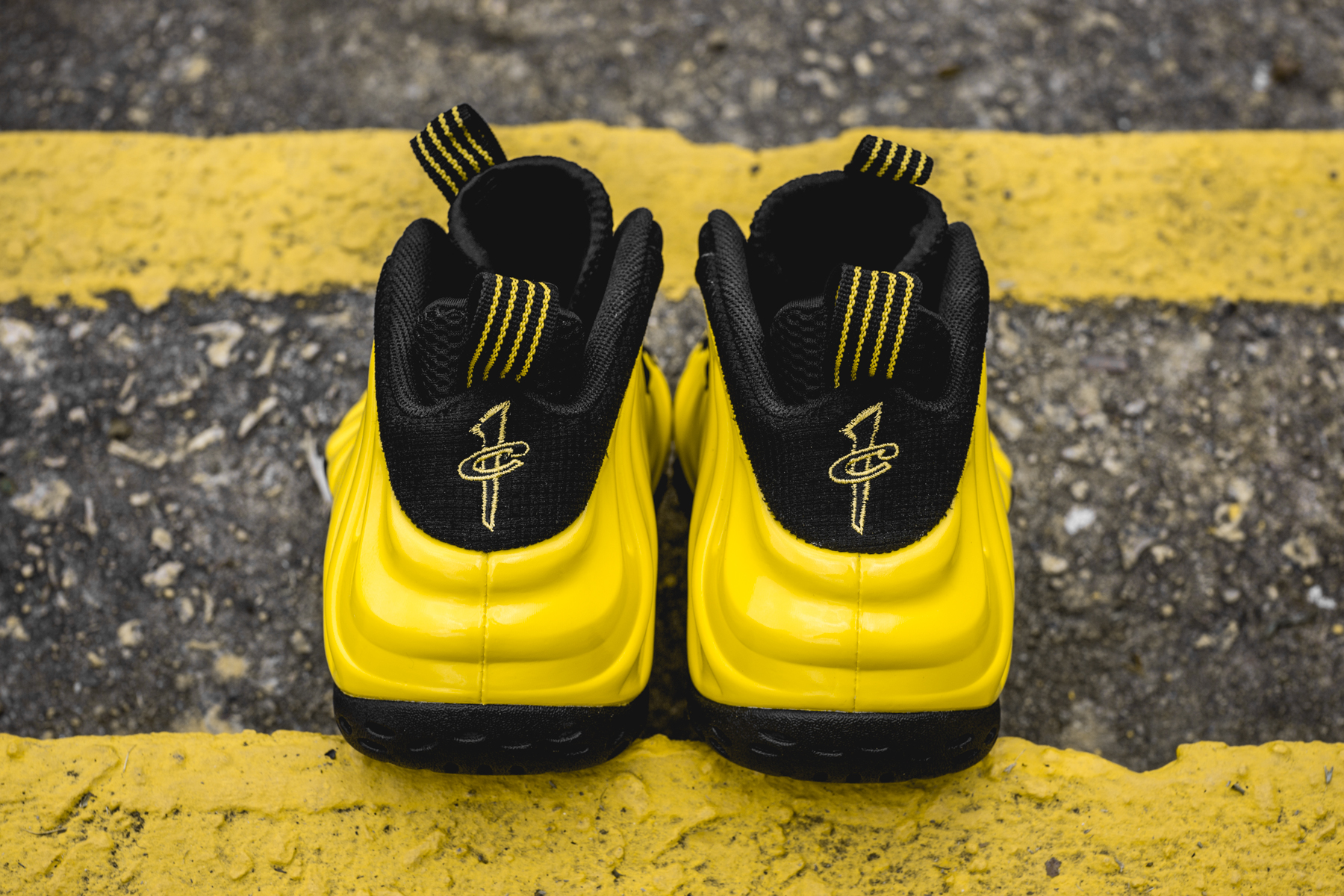 When the Air Foamposite One first released in 1997, it forever changed footwear. The rugged design was as durable as it gets, quickly being adopted by more than just hoopers. Now as iconic as it has ever been, the Air Foamposite One is back in a traditionally color-blocked optic yellow and black color scheme. The latest Foamposite from Nike will be available Friday, June 24th. 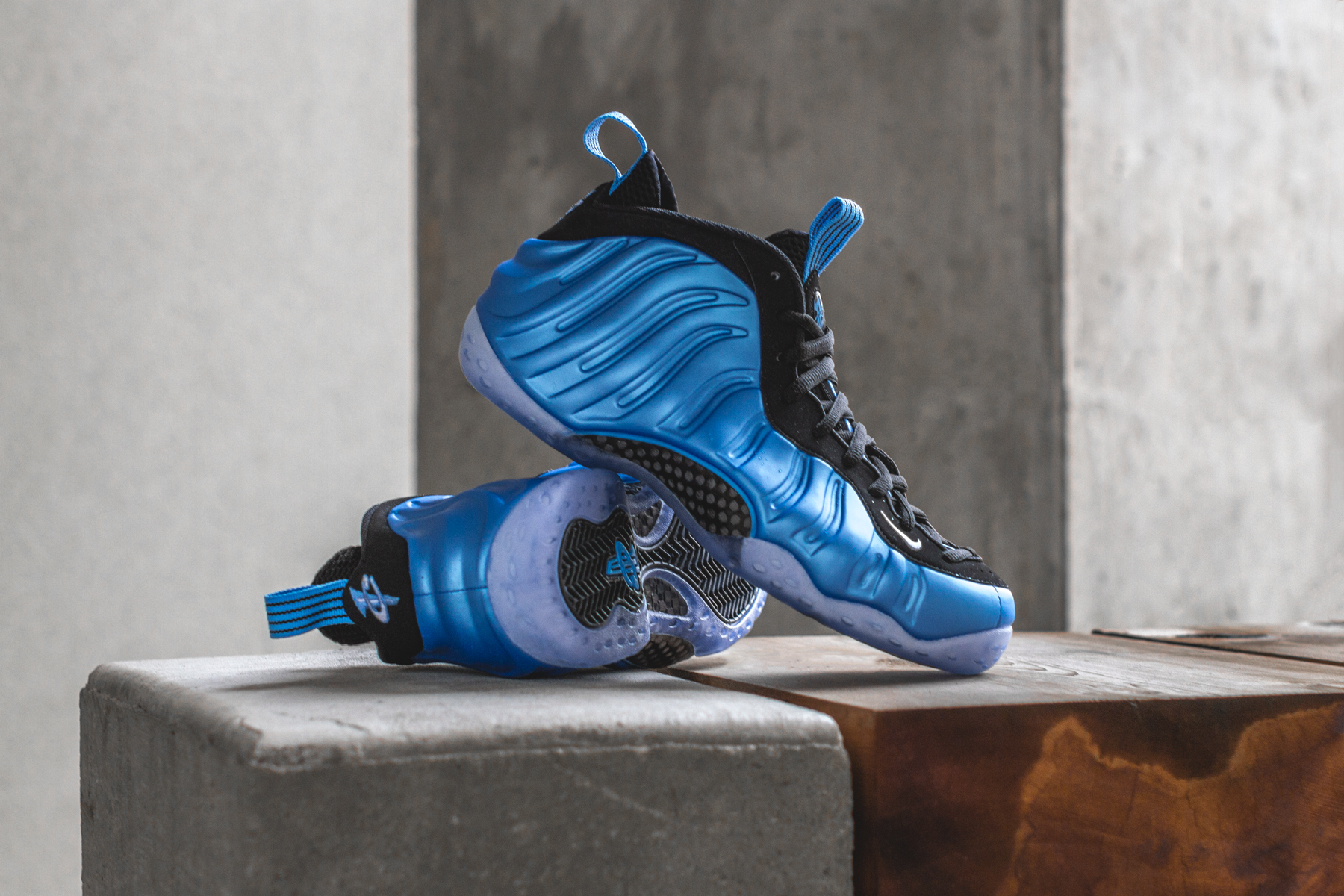 Written by Julie Hogg on February 4, 2016. Posted in Product.

After a successful year for the Foamposite silhouette, Nike looks to keep the ball rolling in 2016 with this University Blue rendition of the classic sneaker. Native to the Foamposite, its shell is covered in a clean and simple University Blue, while the rest of the upper settles for black. Hints of blue are seen on the heel and tongue tab, while an icy translucent outsole completes the sneaker. Look for the University Blue Foamposite to drop this Friday, February 5th.

Closing on another hugely successful year, sportswear giant Nike drops off one final strong release to end the year with high regard. Displaying a shiny “Chromeposite” appearance, the sneaker features what looks like a blue mirror on the side panel. The reflective look shows off a blue gradient atop typical Foamposite details, such as the icey blue sole. Sneakerheads can close out 2016 with one more eye-catching sneaker as this one drops December 31st.

Holiday releases continue to heat up and now we can add this heavy release from Nike to the list with the Air Foamposite One “Hologram”. In typical Foamposite fashion, this one comes in another unique and beautiful colorway with its multi-colored upper seen when reflecting off light. The sole comes in an icey blue while the remainder of the sneaker is toned down with black. Gear up for a busy Thanksgiving weekend as this one drops November 25th, right before all the Black Friday madness.

Just in time for the fall season, a heavy run of Nike Foamposite continues to flood with a first look at the Air Foamposite Pro in a familiar scheme set to release this weekend. While the inspiration hasn’t been directly tied to the luxury fashion brand, the black matte-finished upper, red and green accents, gold lace tips and gum outsole are all typical features of shoes that slapped with the nickname. Be on the look out for the Nike Air Foamposite Pro “Gucci” to be released this friday in-store only.

Preparing for the colder days, longer nights, Nike continues to build its legacy with the Air Foamposite One, just in time for the fall. Ready for everyday wear, all iconic design cues remain; the molded Foamposite upper, the carbon fiber shank, and 1Cent insignia on the tongue, heel, and outsole. The latest design has also been updated to reflect boot inspiration from top-to-sole, with rugged eyelets and laces, and a gum sole.

Three shades of black bring a fresh attitude to one iconicdesign. Featuring a durable construction to accentuate its rugged appeal, the latest Air Foamposite One is built for both afternoon adventuring and nightlife. All original Foamposite design cues  remain intact, from the molded Posite upper to the mid-foot, carbon fiber shank. However, the design’s nubuck inspired finish adds an element of sophistication not yet seen on previous Foamposite models. Be on the look out for the Nike Air Foamposite PRM coming soon in-store at our Moreland Ave. location.

Written by Julie Hogg on February 24, 2014. Posted in Lifestyle, Product.

The Penny Hardaway classic is back from Nike with a bold new colorway. The popular retro model features a full Foamposite shell in metallic silver, topped with a unique graphic reminiscent of tiger stripes. Black hits the tongue and collar, while volt accents throughout as well as brightening up the translucent outsole sitting below. Be on the lookout for these arriving soon to Wish.

Written by Julie Hogg on December 20, 2013. Posted in Lifestyle, Product.

Nike Sportswear brings back the extra-terrestrial themes for its latest Holiday 2013 release with an asteroid-inspired edition of the Nike Air Foamposite Pro. Similar to the “Galaxy” edition of 2012′s Foamposite One, these jewel Swoosh-adorned Foams boast a distinct graphic upper displaying a shattered asteroid motif across its gradient yellow/orange/red/purple/black shell. Finished with the usual nubuck detailing and mesh inner sleeve, the special “Asteroid” take on the Foamposite Pro is now available at Wish.

Purchase the Nike Air Foamposite Pro “Asteroid” now at our Moreland Avenue location as well as via phone or email order.

Written by Julie Hogg on November 18, 2013. Posted in Lifestyle, Product.

After originally releasing in a solid color blocking back in 1997, the Nike Air Foamposite One has seen a lot of different prints in recent seasons. In the same vein as the Foamposite “Weatherman” and “Thermal Map” iterations comes the Nike Air Foamposite One “Safari.” Completely covered in the classic black and white safari print, black eyelet panels and orange detailing contrasts the greyscale pattern. An icy translucent outsole balances out the design, keeping the focus on the upper. Be on the lookout for word on this upcoming release.

Written by Julie Hogg on September 25, 2013. Posted in Lifestyle, Product.

Fans of the Nike Air Weatherman Pack will be delighted as Nike is set to release another model in the Weatherman family. Dubbed “Thermal Map,” this release sees an Atomic Red Thermal Map pattern in place of the Doppler Radar visual of the original pairs. Much more understated than its other Weatherman counterparts, this sneaker will be a solid addition to any footwear arsenal.

Written by Julie Hogg on August 28, 2013. Posted in Lifestyle, Product.

The Nike Air Foamposite One model is back with an interesting design. By far one of the most experimental colorways to be seen from Nike yet, this release features an all-over Doppler radar print over an all Whie upper. Sitting atop a translucent Blue sole, this release will be available at Wish soon.

Written by Julie Hogg on August 14, 2013. Posted in Lifestyle, Product.

As a tribute to the vintage Barkley vs. Godzilla Nike ads, Nike has released the Nike Barkley Posite Max in a “Gamma Green” colorway. This unique Green tone is seen with a metallic shine throughout the foamposite upper juxtaposed by the black nubuck that runs throughout the shoe. The look is completed with an icy blue sole and black speckle running throughout.

Thanks to Penny Hardaway’s stay with the Orlando Magic, the Hardaway line of Nikes have seen long been mixed up in the royal colorway. However, departing from the usual combonation of colors that this model usually sees, the Nike Air Foamposite “Sport Royal” features a shiny sport royal upper with wolf grey lining along the trim and lace work. An icy outsole caps off the colorway, complemented by the classic carbon fiber support.

Be on the lookout for this release in-store only on Saturday, June 29, 2013 via our Moreland Ave. shop.

If there are any remaining quantities, phone orders will be offered starting at 5:00PM EST on the day of the release by calling 404.880.0402. No pre-orders or advance sales are allowed.

Written by Julie Hogg on June 7, 2013. Posted in Lifestyle, Product.

The Nike Air Foamposite Pro makes a return ths weekend with the release of the Foamposite “Camo”. Though not usually favored over the Foamposite One, this Pro Model seems poised for a big release turnout. Featuring a decidely traditional camo pattern, this shoe sees a suede upper with hits of Volt sprinkled throughout and a gum sole. Releasing this Saturday June 8, these shoes will be available at Wish in-store for $240 USD. Take a look at the images below for a closer look.

Phone orders will be accepted by calling 404.880.0402. Email orders are accepted via orders@wishatl.com with a size request.

Friday, August 31st, Wish will be releasing the Nike Air Foamposite Pro in Metallic Platinum. This shoe will be available in-store at our Moreland Avenue shop. Phone orders will be welcome on all styles after 5:00PM EST on the day of the release by calling 404.880.0402 ext #2. Don’t miss it!

The Foamposite always a big hit here at Wish this time dropping in a vibrant metallic red just in time for the upcoming Valentines Day with a release date of February 4th. The shoe mock up is an all metallic red with the lace area and tongue being blacked out. To finish it off the heel is hit with the Penny Hardaway logo and the translucent sole with a carbon fiber arch inlay makes this Foamposite one for the books. So ladies if you were wondering what to do for your man this year this just might be your solution! A release date is slated for February 4th through our Moreland Ave shop. No pre-orders or holds will be allowed in advance and will be carrying a retail price-tag of $220 USD. Phone orders will be welcome after 5:00pm EST on the day of the release by calling extension #2 at 404.880.0402.

Written by Julie Hogg on November 9, 2011. Posted in Product.

Gearing up for this Saturday’s release of the Nike Zoom Rookie in Binary Blue/Black-White, today we preview the forthcoming drop. Crafted in the signature Nike colorway, the metallic binary blue foamposite build is contrasted with a mostly solitary black upper atop a translucent outsole. The shoes are slated to release November 12th, in-store at our Moreland Ave. location. Phone orders will be welcome after 5:00pm EST on the day of the release by hitting extension #2 when you dial 404.880.0402.

Part of the Nike “White Pack”, The Beaverton boys will be releasing an Air Force 1 Foamposite in White on May 5, 2011.  Exhibiting a super purist look that can only comes from a white on clear silhouette, the Air Force 1 will be releasing with a retail tag of $185.  You can pick them up in-store on the day of the release or by phone after 5:00PM (EST) by calling 404.880.0402 ext #1.