Written by Wish ATL on November 7, 2019. Posted in Release Dates.

“Bringing together nostalgia and personal style, Nike is partnering with native New Yorker, Olivia Kim, on the Nike by Olivia Kim collection, a capsule of apparel, footwear and accessories that evoke the fun, playful side of New York City in the 90s. Inspired by Olivia’s childhood love of Nike and the vibrant, creative culture during her formative years growing up in Downtown Manhattan.”

“The capsule is a perfect confluence of classic Nike designs with Olivia’s style rooted in the rave and hip-hop styles defining that era. Think 90s subculture in New York where DIY fashion reigned the streets and youth culture everywhere was reclaiming their childhood through sartorial expression.”

A cult classic since its launch in 1996, Olivia references the OG Footscape design created by the Nike sport research lab, but flips it with a pink and zebra print. With these sneakers, she unites a universally downtown punk attitude found on St. Marks in the East Village all the way to the underground energy of Tokyo.

As bold as the city that inspired her collection, Olivia updates the Air Force 1 with a volt and game royal colorway. Her references remain firmly 90s, adapting the 1996 ivory snakeskin swoosh design paired with the elevated feel of game royal corduroy. Olivias AF1 nods to the New York streets from which they were born, while unequivocally making a statement wherever they go.

First released in 1991 as a running-hiking hybrid, Olivia pays homage to the original intention of the Mowabb as a transitional sneaker. Her reimagining reflects Olivia’s own contrarian approach to fashion, presenting a style that can take you anywhere. The teal and red colorway contrasts the brown and black upper to emphasize the footwear’s dual personalities. 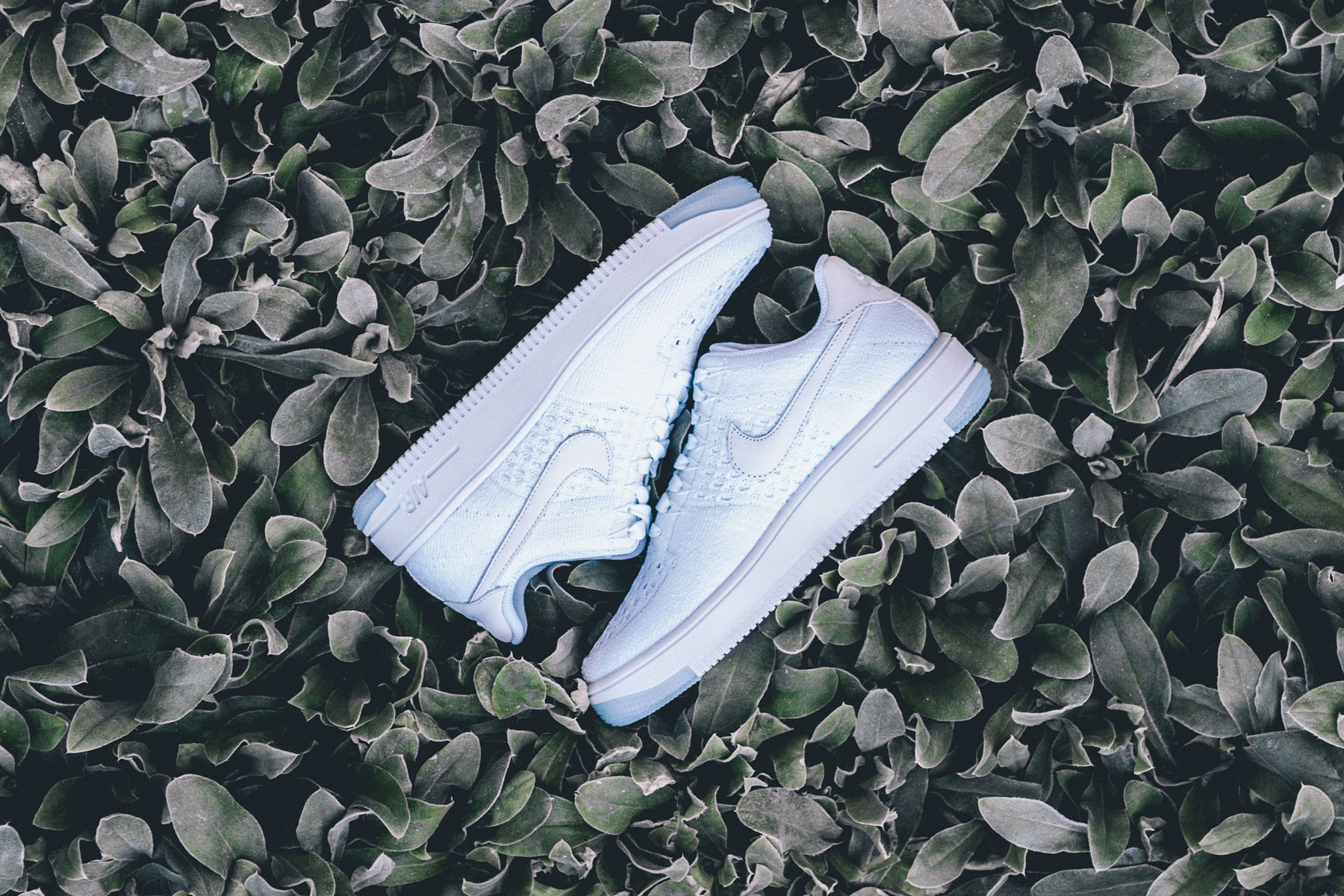 Featuring Nike Flyknit for the first time, this version of the hoops legend is the lightest ever, weighing 50% less than the original. The all-white version is just as beautiful as previous knitted Force’s, featuring a solo tone of white with just a hint of icey blue on the toe and heel. Look for this one to drop this Wednesday, March 16th. 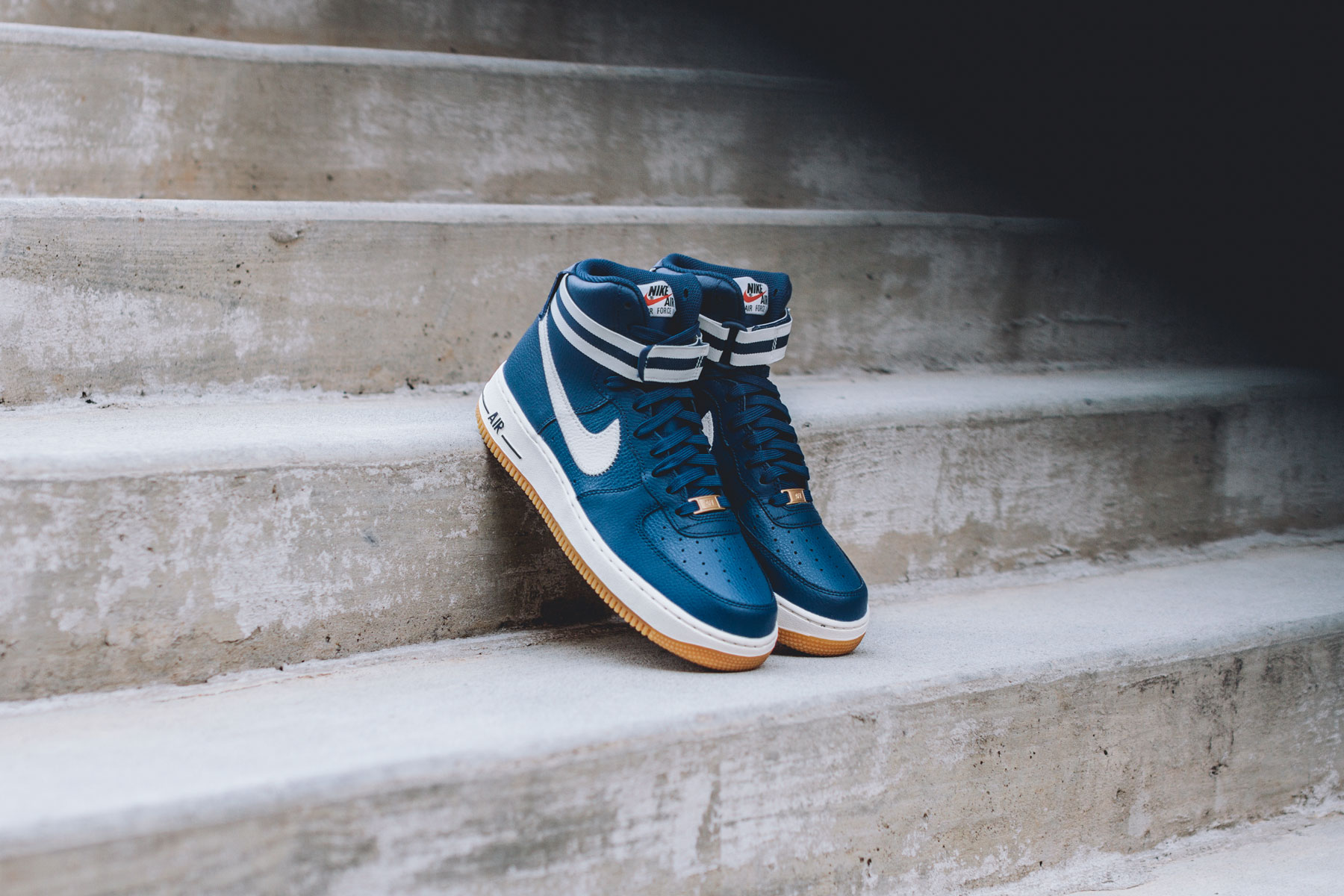 Your Spring shoe has arrived with Nike’s latest rendition of the Air Force 1 High, dressing it in a highly wearable Coastal Blue. Nautical vibes are all over this one with its gum bottom, and off white accents on the midsole and Nike swoosh. The AF1’s signature strap comes in the same Coastal Blue and off-white, while a gold plated metal detail is visible on the laces. Get ready for Spring with the Coastal Blue Nike Air Force 1 High. 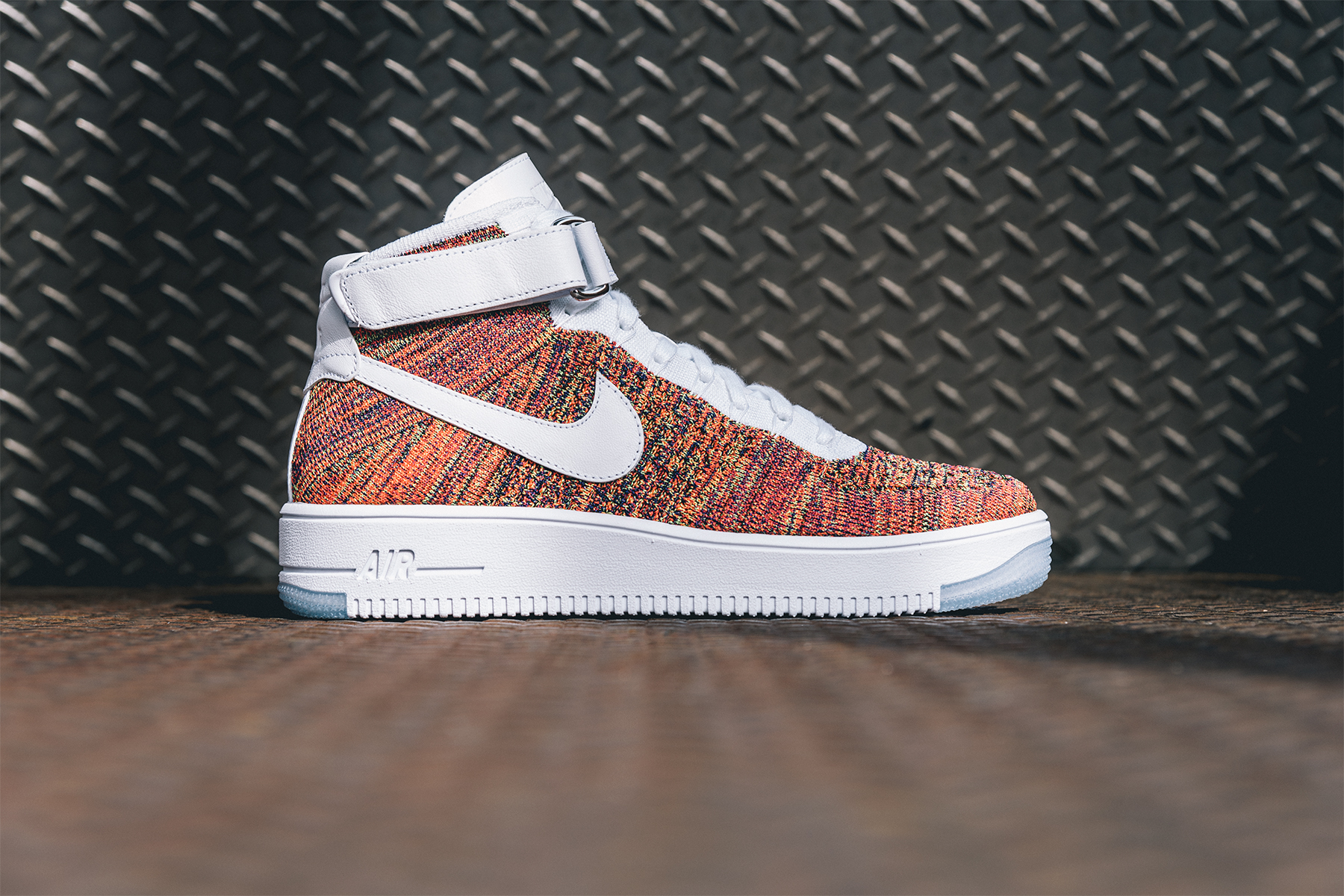 Written by Julie Hogg on February 4, 2016. Posted in Product.

The lightest AF1 to date, the Nike Air Force 1 Ultra Flyknit Men’s Shoe weighs 50 percent less than the ’82 hoops original thanks to its all-new, ultra-breathable Nike Flyknit upper. Strategically crafted Flyknit panels add dimension while remaining true to the AF1 design aesthetic. Woven Flyknit yarns integrate areas of high breathability, stretch and support where you need it most, conforming to the shape of your foot for a comfortable, lightweight feel. 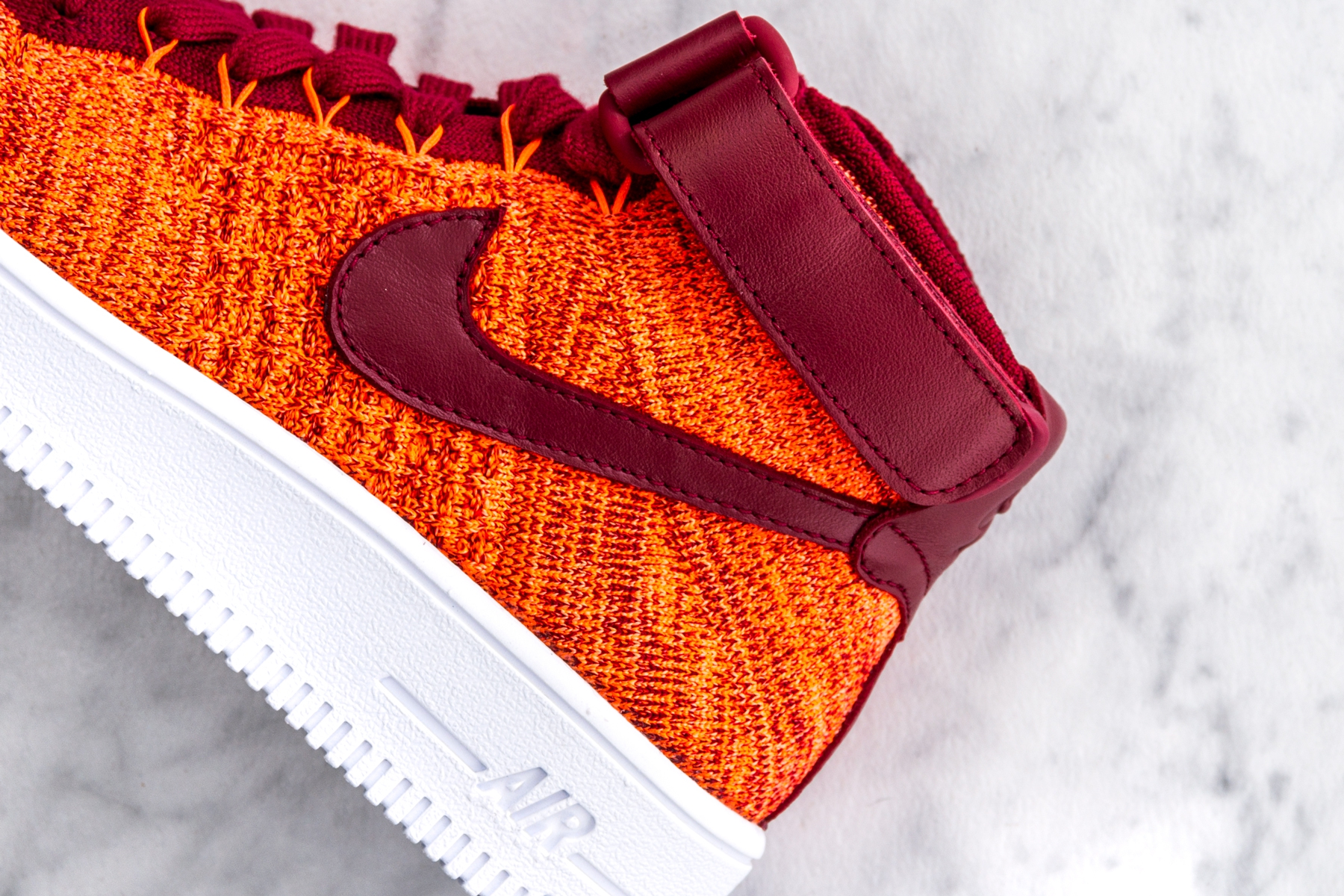 Featuring Nike Flyknit for the first time, this version of the hoops legend is the lightest ever, weighing 50% less than the original. Nike has dropped off three unique colorways to help introduce this knitted version of their famed silhouette, a “Total Crimson” and “Black/White” for women and a “University Red” for Men. The men’s and women’s Nike Air Force 1 Flyknit are now available January 28 in-store and by phone order.

Nike is back with another Air Force 1, this time giving it the wheat treatment in the classic AF1 high silhouette. This one features a full wheat-based nubuck upper, rope laces, and branding on the heel and tongue. A full gum rubber sole completes the sneaker for a mostly mono-colored look.

Luxury continues to be a trend with Nike releases and this Air Force 1 is no different. With its premium ostrich embossed leather, this Nike release is sure to impress. Details are not lacking on this one, as the sneaker comes equipped with a translucent blue sole to see the air within, while gold accents on the lace tips, tongue, and lace eyelets finish off the premium sneaker.

Nike’s famed Air Force 1 silhouette has seen nearly every make up out there, and theres no stopping Nike with this new rendition of the classic sneaker. For this go-around, Nike has chosen to wrap the sneaker in a premium “Croc” leather. The upper of the sneaker comes in military green, while the midsole recieves a clean white treatment, and the shoe is finished off with a gum sole. The croc embossed leather looks like it could could have straight off a crocodiles back, making this Air Force 1 unlike any one you’ve seen before.

Written by Julie Hogg on October 6, 2015. Posted in Product.

Nike continues its rapid releases of Air Force 1 Retro’s with this High top which is a nod to the Chinese New Year and China’s huge impact on the Nike brand since the 1980’s. Dubbed the “Nai Ke”, the always beautiful Nike “Gym Red” color wraps the sneakers upper, while a white suede fills the Nike swoosh. On the heel of the shoe you will notice lettering in Chinese which finishes the Chinese inspired sneaker nicely. China’s impact on the Nike brand has been huge over the year and the Air Force 1 silhouette has always been a major force in Chinese markets, so it was only right Nike dedicates this one to a country that truly embraced it.

Written by Julie Hogg on October 2, 2015. Posted in Product.

Nike is back with another retro re-release of one of their most famed silhouettes, the Air Force 1 High, this time in a classic 1982 colorway. This one comes in a premium “summit white” leather, with “game royal” detailing seen throughout, on the sole, swoosh, strap, lining, and heel. Finishing of the shoe is the signature Nike swoosh in a smooth “game royal” suede. Look for the retro hoops sneaker to hit shelves this Saturday, October 3rd.

Peace Love World may seem like an overnight sensation to some, but to Creator, Visionary and Designer Alina Villasante, the luxury lifestyle brand is a dream come true through dedication to hard work and commitment to spreading peace, love and happiness. Peace Love World is more than just a symbol on a shirt. It is a way of life. Every garment is branded with positive affirmations and infused with love in the form of eight embroidered red dash-marks, one dash for every letter in the word “love” and the word “amor”.

Wish is excited to be one of Peace Love World’s newest retailers as the company has recently partnered with the NBA to create a line of chic womens apparel for all 30 teams. Head to our Moreland Ave. location to check out the apparel.

To say that Nike is a sportswear brand would be to undervalue the brand on multiple levels. From dominating the world of technical sports and lifestyle products and just about everything in between, Nike has created reputation as one of the world’ most innovative companies. For Summer ’15, Nike brings back the Dunk CMFT PRM White, Lunar Force 1 14′ PRM White, and Blazer Lux PRM White. Featuring full-grain leather upper and clean, all-white aesthetic for classic comfort and a vintage look.

Purchase the Nike Summer 2015 Footwear New Arrivals in-store only via our Moreland Ave. location. Phone orders are also accepted by dialing 404.880.0402. Email orders are accepted by sending a size request to orders@wishatl.com

Gearing up for the winter season ahead, Nike Sportswear presents the Air Force 1 High ’07 “Work.” Featuring a high-top editions of the always classic silhouette, the shoe sees the likes of premium leather uppers, metal eyelets, rope laces and gum rubber soles. If you’re looking for the perfect sneakers for the upcoming winter season, this might be a good option for you.

Nike Sportswear taps into the global dominance of the Air Force 1 with yet another “City Pack” of releases. The set is comprised of tonal colorways with uniquely stitched uppers represent not only the aerial maps of each distinct city, but of the signature lines of the Air Force 1. New York City, Paris, and Shanghai are the cities highlighted in this stylized street map collection. For the sock liner, a geometric all-over print pattern highlights the iconic architecture characterizing the individual style capitols. Ladies, make sure you add this heavy hitter to your collection coming soon at Wish.

Celebrating the pride and passion of the game, the World Basketball Festival (WBF) returms this month to the heart of Chicago, Illinois. To honor this year’s World Basketball Festival, the iconic Air Force 1 has been updated with Lunarlon cushioning to reflect the game’s continual progression. Sported with basketball-textured leather upper, which rest above the Lunarlon midsole abd translucent outsole. Blue mesh lining, signature Swoosh branding, and WBF logos tie the design story togetjer with subtly rich detailing. Be on the look out for the Nike Lunar Force 1 releasing 08/14/2014 at our Moreland Ave. location.

This summer, Nike Sportswear joins the celebratory spirit with their patriotic Nike Air Force 1. Perfect for July 4th, the low cut silhouette and American flag graphic adds a festive look to the pair. Be on the lookout for these USA-themed kicks hitting the shelves soon at Wish.

The latest shipment from Nike features the Air Force 1 AC PRM Pack, which offers two detailed-oriented sneakers. First up is the white/white-midnight navy colorway that features a special brushed effect over an all-white upper. The Midnight Navy/White-White  adopts a sailor-inspired aesthetic with miniature navy anchors emblazoned over a grey upper and is offset by a contrasting white Swoosh. Both uppers rest atop a slimmer vulcanized sole.

Purchase the Nike Air Force 1 AC PRM Pack in-store only via our Moreland Ave. location. Phone orders are also accepted by dialing 404.880.0402. Email orders are accepted by sending a size request to orders@wishatl.com

Written by Julie Hogg on February 14, 2014. Posted in Lifestyle, Product.

Nike drops a special pair of releases this Valentines day dubbed the “Acid Wash Denim Pack.” The range is comprised of two pairs of the iconic Air Force 1 model, both sporting bleached jean material about their respective builds. Red accents are also put to use, along with a classic White Gum rubber sole dow below. Topped off by branded Nike buttons, this pair of releases is now available at Wish.

Purchase the Nike Air Force 1 “Acid Wash Denim” Pack now at our Moreland Avenue location as well as via phone or email order.

In the past, Nike has released Penny Hardaway inspired Air Force 1’s . This time around they utilized the Air Force 1 Low CMFT silhouette and added the iconic Air Penny 1 attributes. This hybridization includes a modeled wavy side panel embedded with jewel swoosh, two-tone piping, as well as an icey outsole, all from Hardaway’s first sigs in 1995 along with the Orlando Magic color-up. this release will be available soon at Wish.

Adding to another drop this holiday season, Nike is back with a pair of “Hologram” Nike Air Force 1 Lows. Sporting a sleek touch of silver about the front of the shoe, the splash of holographic material occupies the latter half of the AF1s timeless build. Also adding a smooth touch of silver on the front of the shoe that transitions to holographic material as it works back to the latter half of the low-top build. The Nike Air Force 1 Low CMFT PRM Hologram will be releasing soon, but for now, take a closer look at the upcoming release below: