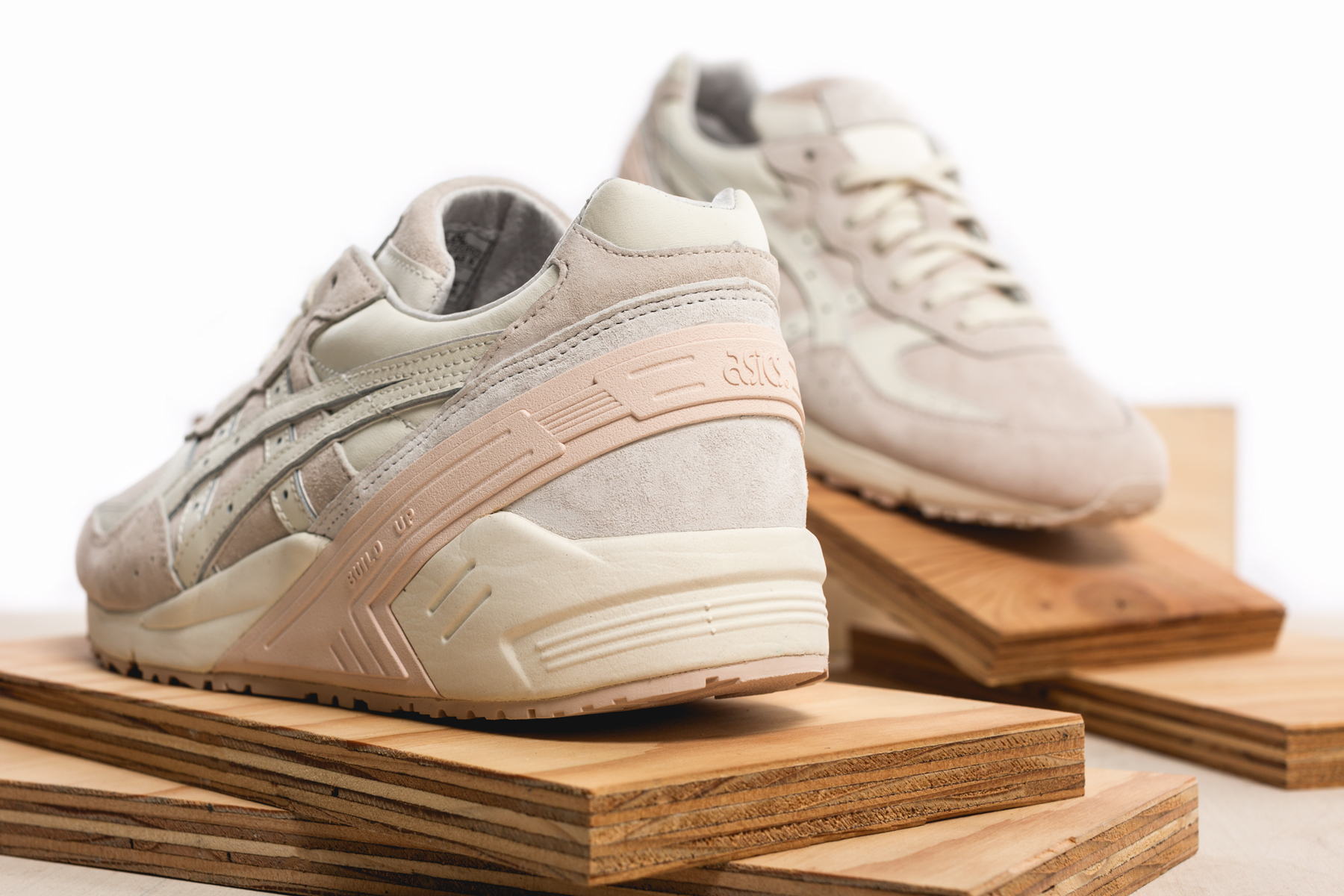 Inspired by the most tranquil moments in life, ASICS delivers a sneaker guaranteed to turn heads. Wrapped in a combination of premium suede and leather, they utilize the classic Gel-Sight sneaker for this unique take on the silhouette. Hints of Whisper Pink pair beautifully with off-white, beige, and khaki. Get right for the summer with the ASICS Gel-Sight ‘Whisper Pink’, available Saturday, June 11th. 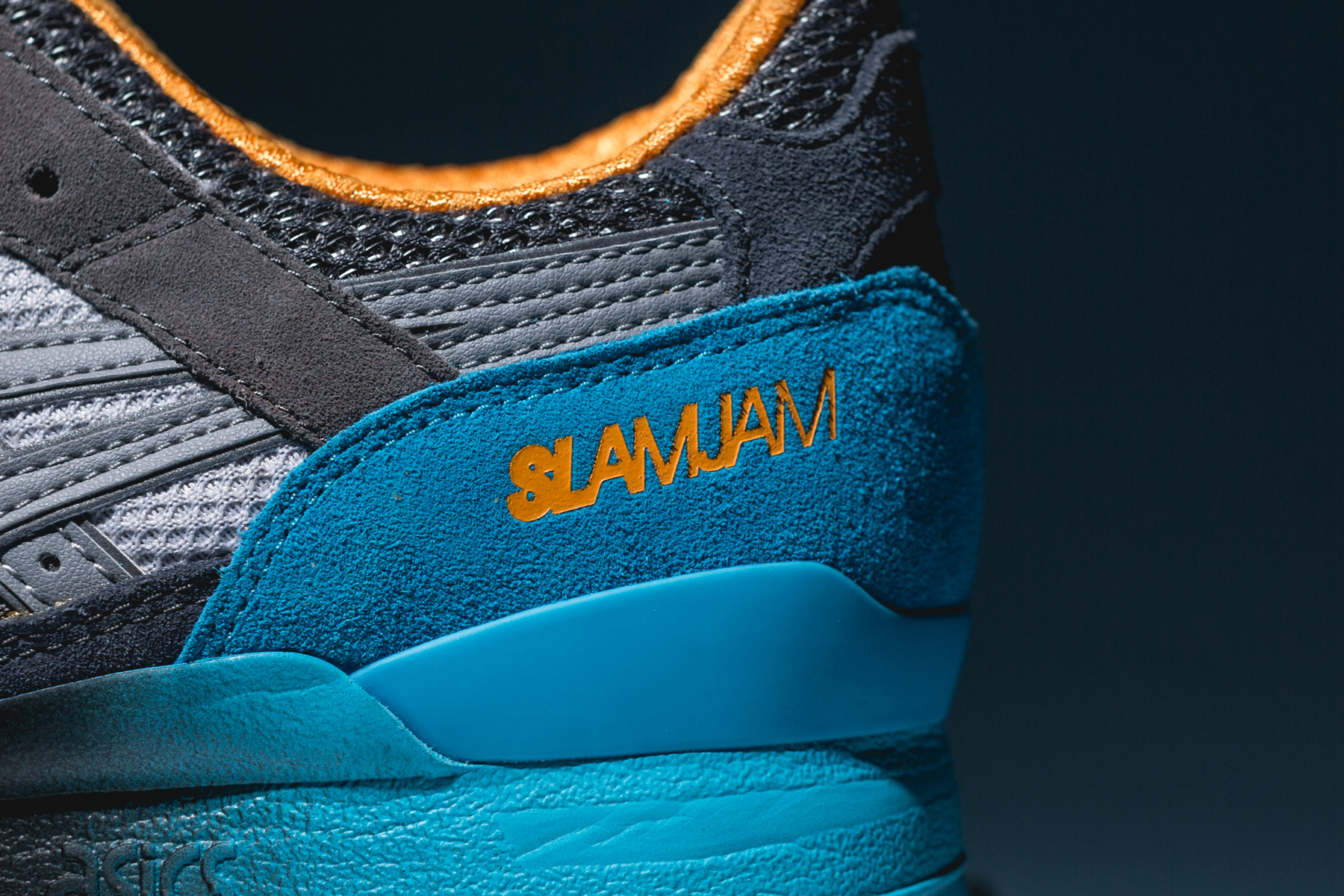 After its latest hookup with Japanese brand Suicoke, Slam Jam keeps up the pace unveiling a new, thrilling collaboration for Spring 2016. This time Slam Jam joins forces with ASICS on a new multidisciplinary project, the 6THPRLL, the sequel of the successful 5TH DIMENSION launched in 2010, through which Slam Jam created the story of an imaginary universe focused on active sports and dynamics. The sneaker is a darker version of this previous world, a world that doesn’t exist but is real and populated by tribes, where shades of black and grey represent their unknown existence.

The Gel Lyte III 6THPRLLL is a far more aggressive version of the 2010 silhouette: it boasts a mesh upper in different shades of grey with matching suede overlays in the fore-foot of the shoe, while the heel panel is rendered in a lively light blue tone, leather Onitsuka stripes, branded sockliners, split tongue highlighted by the lining’s fluo accent and gradient sole unit echoing the upper’s colorway. Look for ASICS latest collaboration to drop this Saturday, June 4th. 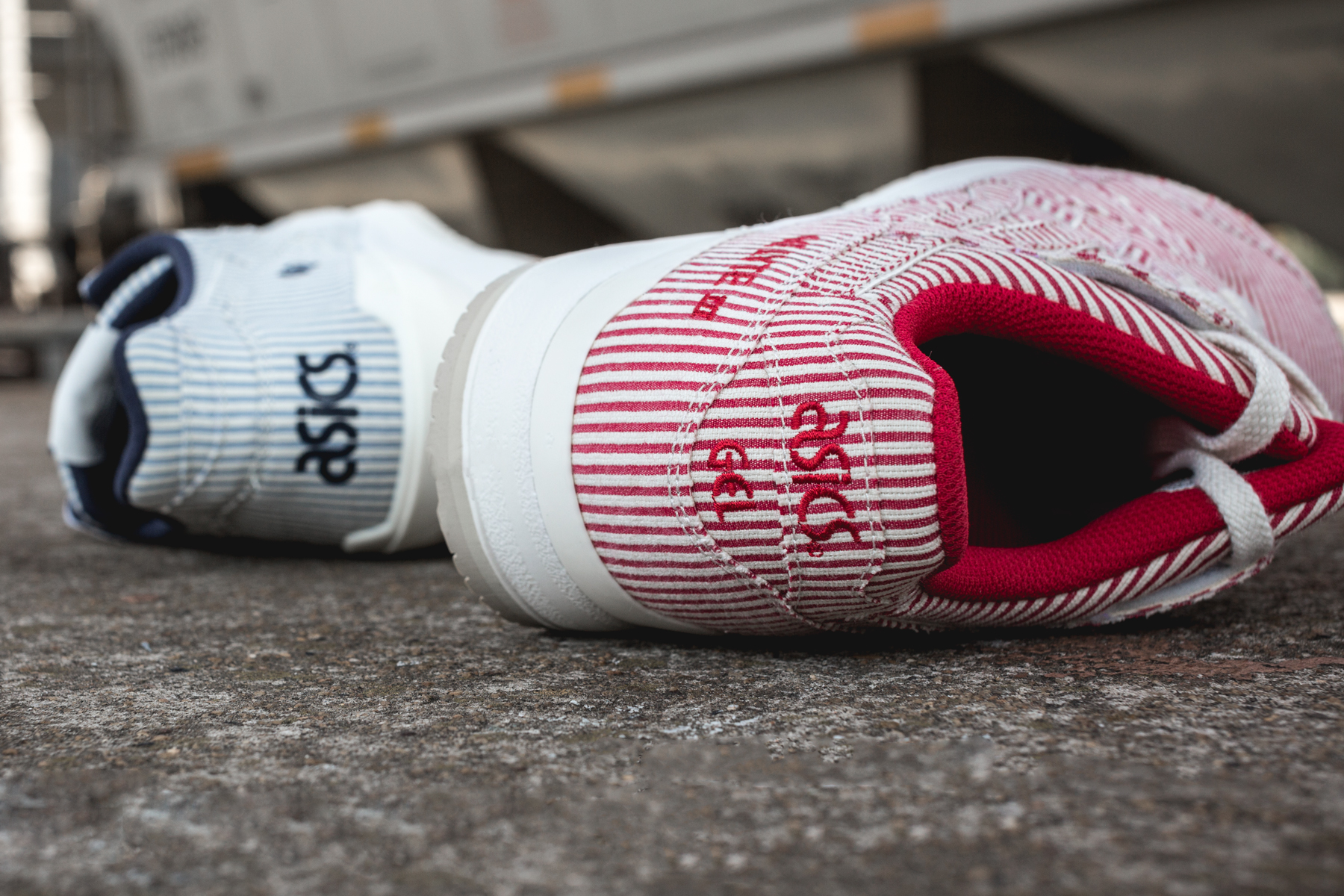 Falling right at home in these warmer months of the year, ASICS comes through with a ‘Seersucker’ pack, utilizing the traditional pattern on two of their most popular lifestyle silhouette’s. Dressed in red and blue seersucker, the material is not something often seen on sneakers. Off-white detailing helps to accentuate the summery design, while the outsole opts for a slightly darker treatment. Look for the ASICS ‘Seersucker’ Pack to release this Saturday, May 28th. 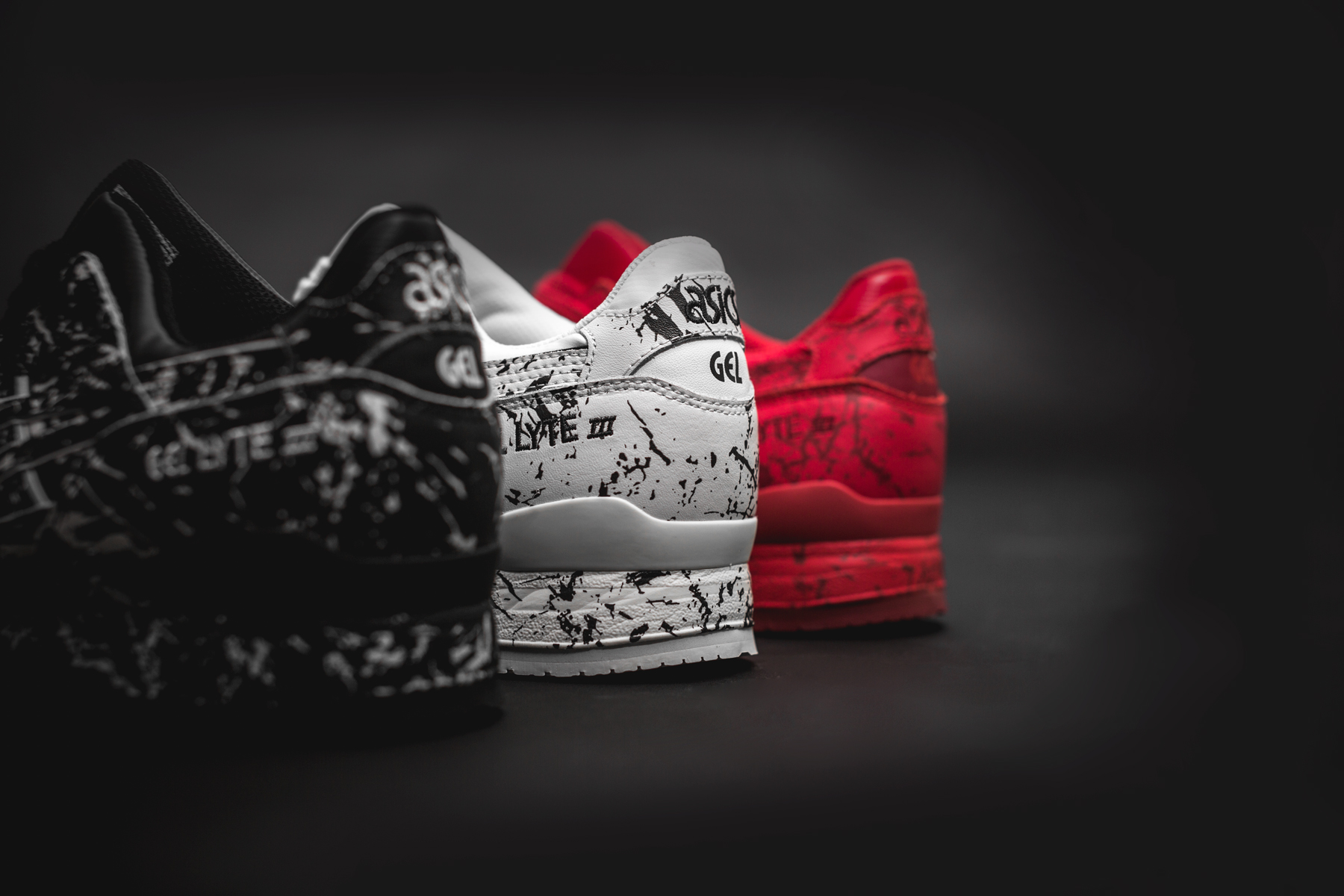 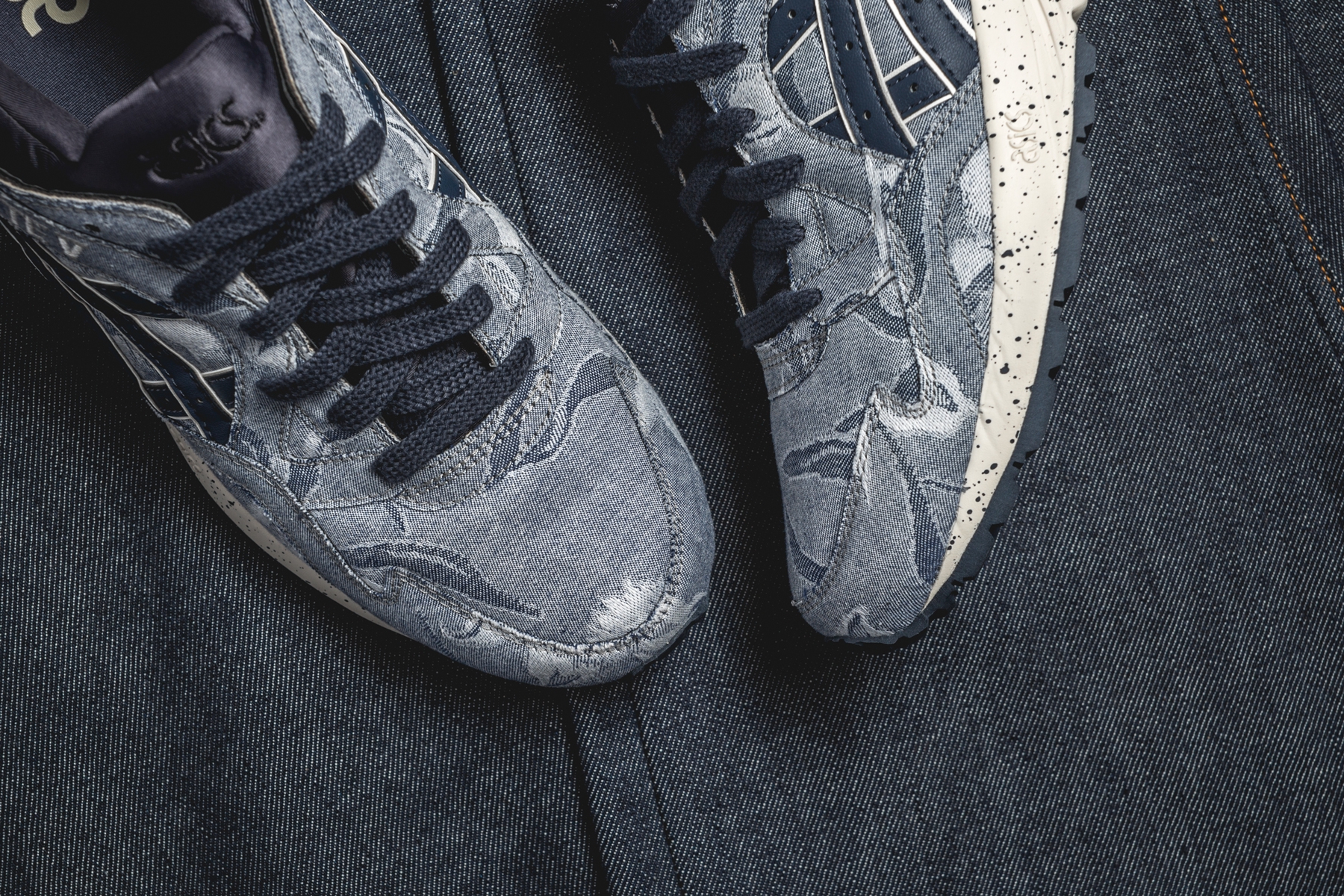 Following up on the release of the Gel-Lyte III ‘Japanese Textile’, ASICS gives us the Gel-Lyte V iteration, this time featuring a faint floral pattern. The pattern on the upper comes in a deeper Indian Ink colorway, while other details on the sneaker consist of speckling on the midsole. This one can now be picked up in-store at our Moreland Ave. location. 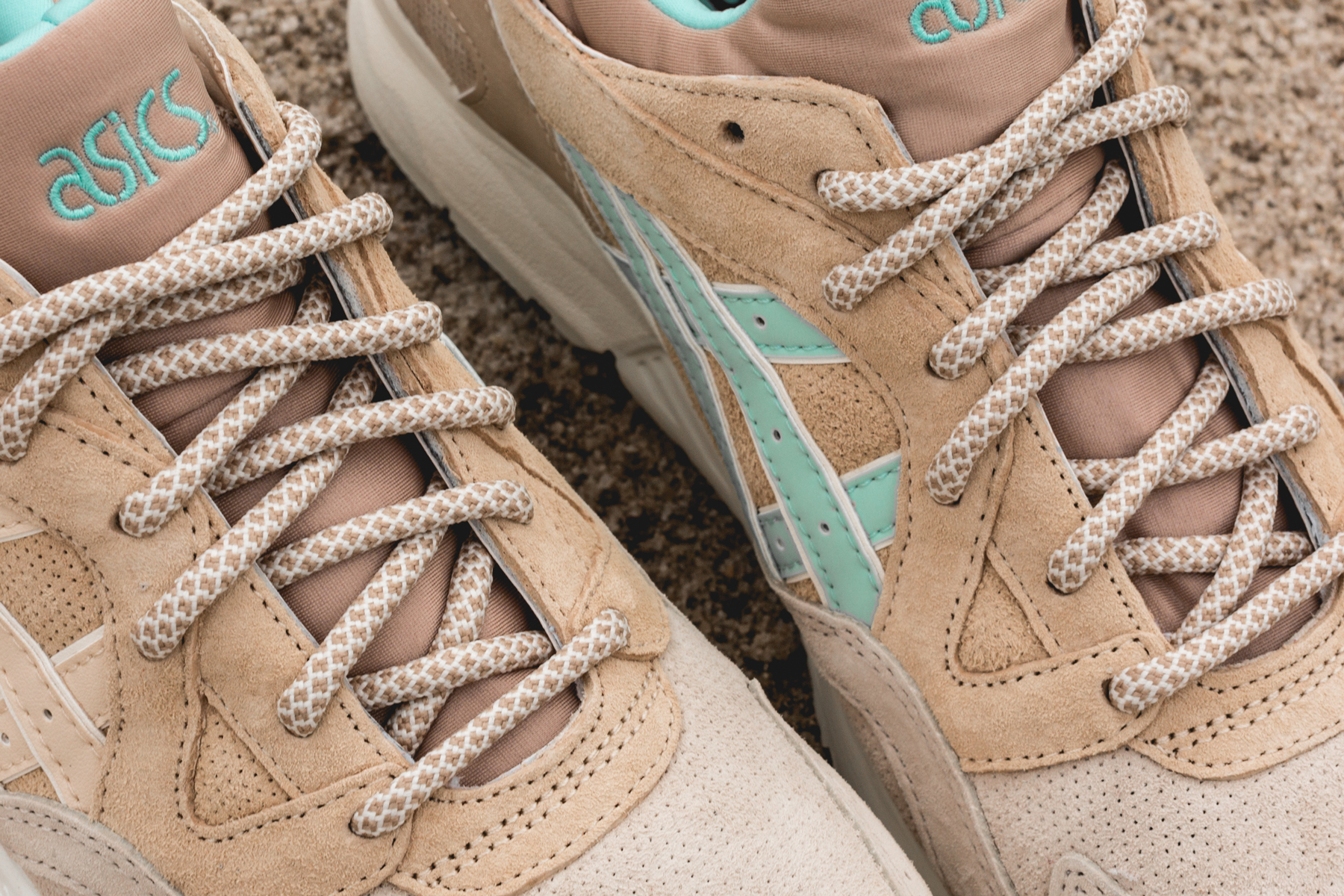 20 years since opening its doors in the cobbled streets of Covent Garden, OFFSPRING has come a long way. Now, to celebrate 20 years of growing success in the UK, OFFSPRING teams with ASICS for part 1 of 2 of the ‘Cobbled Pack’ series. Utilizing the Gel-Lyte V silhouette, the sneaker draws its color make up from the off-white stones that fill the streets of the Covent Garden market piazza. Meanwhile the turquoise sock lining draw inspiration from the store’s original colors back in ’96. Completing the shoe is the “=+” symbols on the insole, which is Japanese for 20. Be sure to cop this hot release when it drops this Saturday, April 16th. 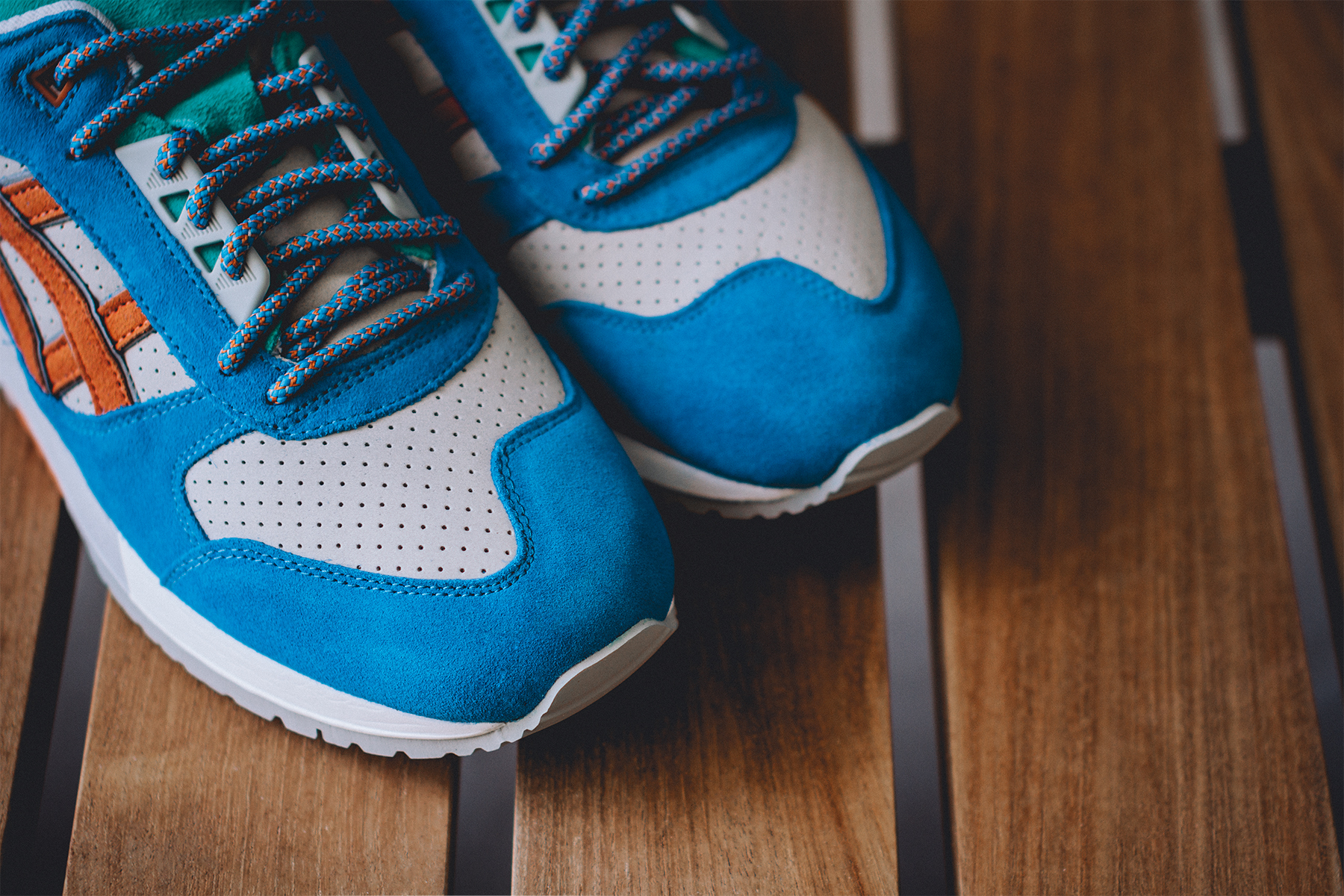 Connecting with ASICS’ Japanese roots, the vibrant color palette used on the ASICS x Patta GEL-Respector is inspired by rich, colourful anime films and characters such as tropical fish and mythological creatures. The upper is comprised of overlays in methyl blue premium suede, with flame orange striping and marine green accents juxtaposed against a grey perforated nubuck base. Details include 3M striping underlay, custom tongue pulls, embossed logos on the heel, branded sockliners, and matching laces in flat and rope options. The Patta x ASICS Gel-Respector will be available this Saturday, March 12th. 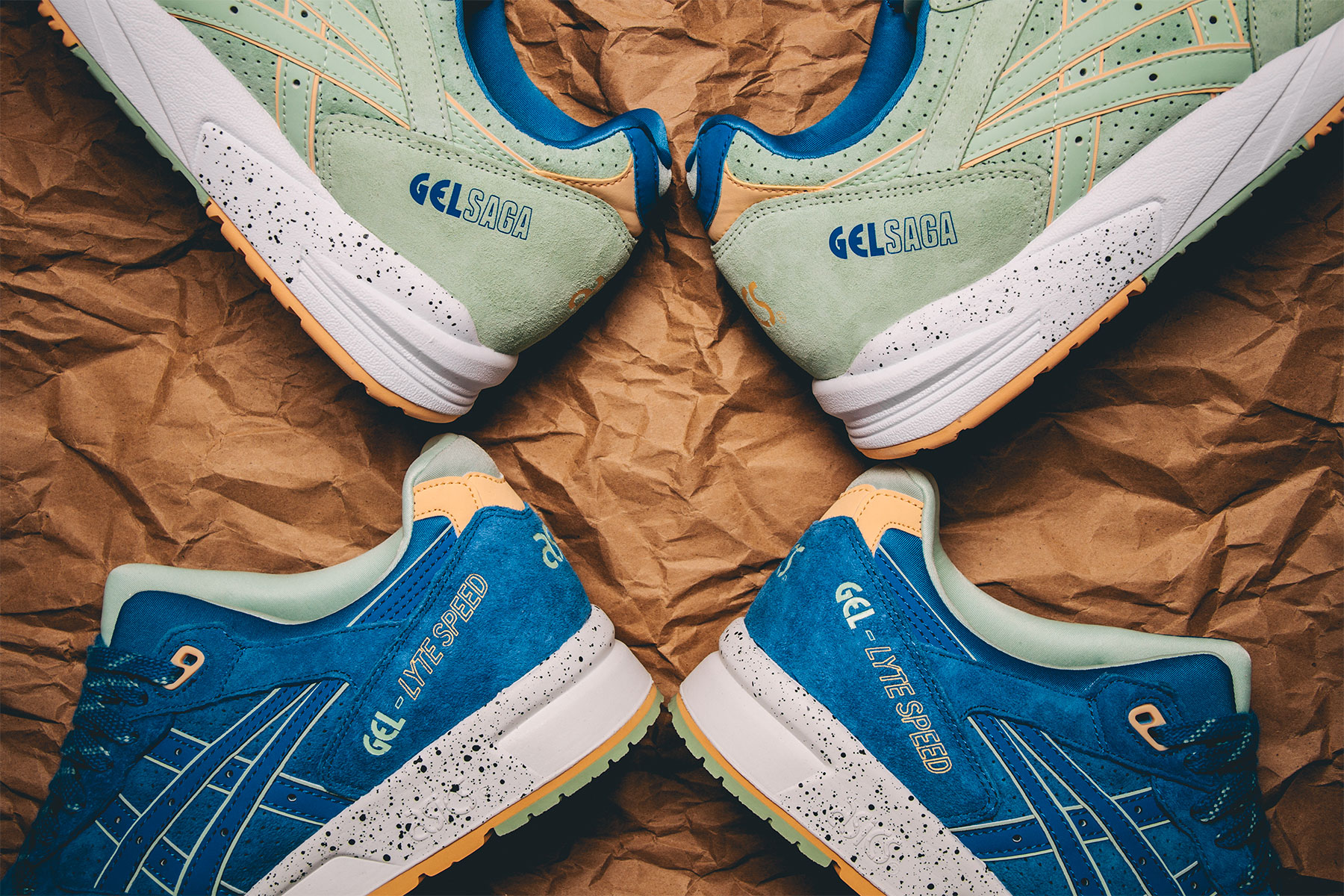 With Easter right around the corner, ASICS drops off their latest take on their series Gel-Lyte sneakers. This time using the Gel-Lyte Saga, and Gel-Lyte Speed as their silhoutte’s of choice, they dress the two in festive colorways. For the Saga, they maintain a Spring vibe with the pastel green on the upper, with hints of a contrasting rich blue. Details on this one come in the form of speckling on the midsole. For the latter, the Gel-Lyte Speed, ASICS has reversed the color palette, maintaining the speckling on the midsole. Both sneakers can now be picked up online and in-store, just in time for the Holiday. 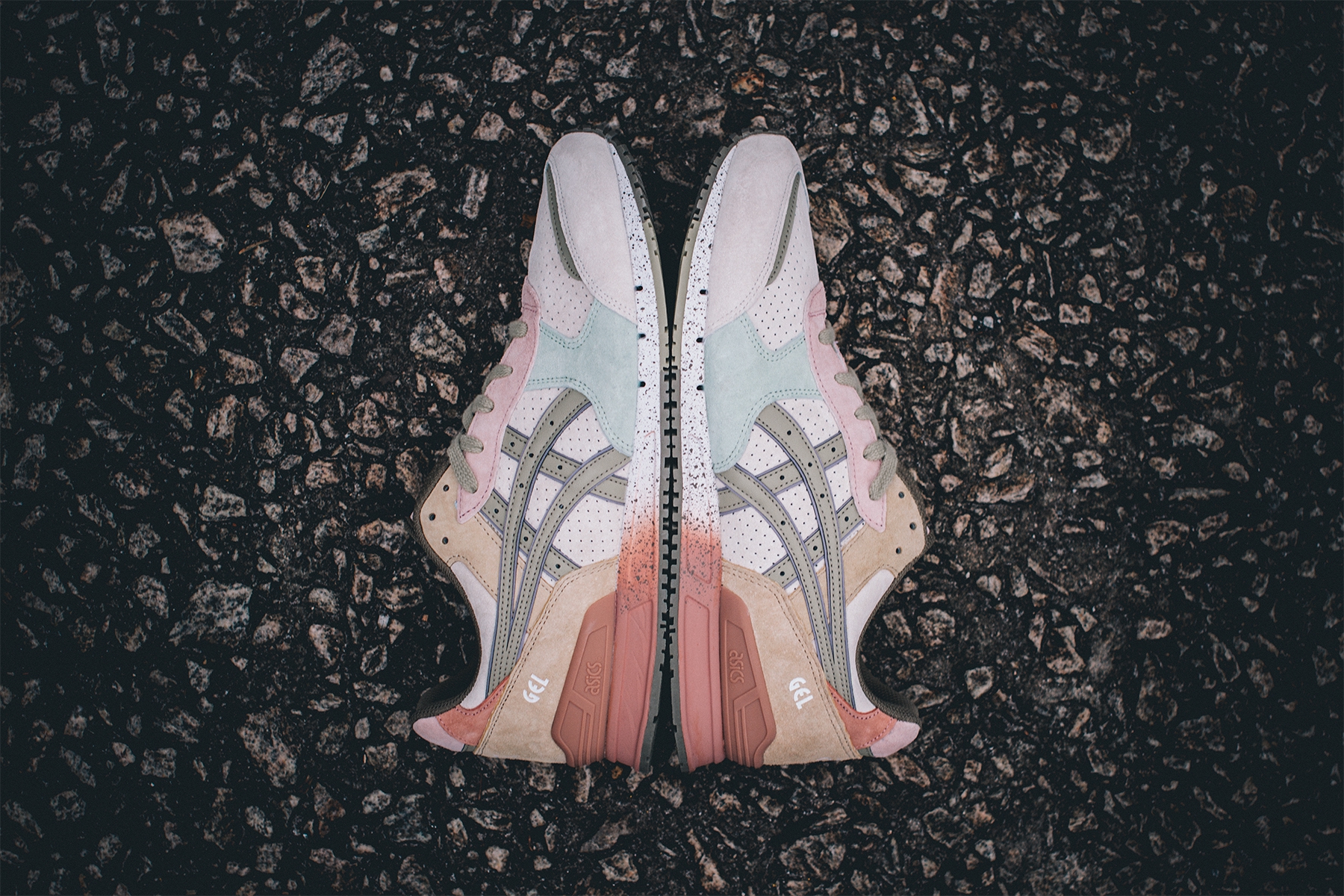 Asics and Bodega capture the spirit of the road in a classic running shoe, the Gel Classic to be exact. In keeping with the spirit of exploration, a deep dive into the Asics archives yielded the early 90s stability runner being reintroduced as the Gel Classic. The original upper has been replaced with lush suede, while the famous Asics tiger stripes are rendered in leather. The toebox and side panels of the shoe are perforated, not just as a visual distinction, but as a subtle nod to the breathable nylon upper of the original Gel Trendy. The new color palette features neutral earth tones accented by soft pastels, which all serve to highlight the sensations of the open road.

Following up on the release of the Gel-Lyte III “Rose Gold” pack last month, comes a drop of the same kind, this time utilizing the Gel-Lyte V silhouette. With a color palette sure to impress, the sneaker boasts a clean black upper on one, and tonal cream on the latter. Details on this one are rounded out by its speckled midsole, waxed laces, and rose gold accents on the heel and side panel. Get 2016 started off right with this strong drop from ASICS, releasing January 2nd.

After a very strong year, ASICS comes through with a collection to help close out the year and ring in a new one. On the heel of the 25th anniversary of their Gel Lyte III silhouette, ASICS comes through with a silver Gel Lyte III and a gold Gel Lyte V. The shiny gold and silver hues make up the uppers of both sneakers, while the midsole receives a clean white finish. Be sure to pick these up before the ball drops and its 2016, as they are both now available in-store and online.

As various boutique’s continue to put their spin on the Asics GEL-Lyte III for the 25th anniversary of the iconic silhouette, hanon Shop take their turn on it. The inspiration for this sneaker came from the longest and shortest days of the year, typically referred to as the solstice. The Scottish boutique has applied a luxurious blue azure upper to the sneaker paired with a plush purple. Detailing for the sneaker starts with the 3M underlays, in place to mirror the ever-changing hues during summer nights. Additional detailing comes in the form of a co-branded tongue patch, printed footbed, and a fire detail on the heel. To top it off, the duo has included 3 pairs of laces in each box to interchange the laces. Be on the lookout as these drop this Saturday, 11/28.

Southern Cali sneaker boutique BAIT has teamed with ASICS for their take on the Gel Lyte III, which is in its 25th anniversary. The viscious sneaker dubbed “Nightmare”, features an immense amount of attention to detail, from its speckled midsole to its contrasting tilapia skin and reptile skin. For those fans of 3M, they’ve even included reflective detailing on the sneaker. ASICS and BAIT have also included their branding on the inside and outside of the shoe, as seen on the insole and bottom of the shoes. This release comes in limited supply so you won’t want to miss out on this one.

Asics takes a streetwear staple and turns it into one of their latest versions of their GEL-Lyte III silhouette with the Japanese textile wrapped design. Besides Japanese denim, the shoe also shows hints of red and yellow for a well rounded constrasting look. The kimono print fabric is seen on the lining near the ankle to complete the shoe. Look for these to hit Wish this Saturday, August 20th, in-store only.

Asics, fresh off a string of strong collabs with various designers, is back with a pack of beautiful monochromatic sneakers done all by themselves. The pack consists of a Gel Lyte V, Gel Lyte III, and a Gel Respector silhouette and all feature an eye-catching python texture on the upper. The Gel Lyte V comes in red, the III in black, and the Respector in white. To finish off the clean sneakers, they all come with reflective detailing on the laces. Look for these to drop this Saturday, August 15th, online and in-store at our Moreland Ave. location.

Onitsuka Tiger is back for part 2 of their Cervidae sneaker, complete with the hiking vibes of the original. Once again, Onitsuka has chosen to go with a range of brown hues, on a buttery premium suede upper. Zig-zag stitching is seen on the toe, while debossed branding and reflective details finish the shoe. Look for these to release in-store only Saturday, 8/8 at our Moreland Ave. location.

Asics has partnered with Copenhagen-based female retailer Naked for their first women’s only collaboration. The beautifully colored shoe, with coral and mint tones, also features a black upper and white speckles on the signature Asics stripes. The sneaker is packaged with two sets of additional laces coming in coral and mint both. Inspiration for the shoe came from Copenhagen’s greatly photogenic summer sunsets and copper slated rooftops. Look for the sneaker to release this Saturday, August 8th.

The UBIQ x Asics Gel Lyte Speed “Cool Breeze” was inspired by the positive and refreshing vibes we all experience during the summer months. The clear blue skies and rejuvenating feeling when we step into the cool waters of the ocean served as their muse when developing this project. The “Cool Breeze” blends shades of aqua, sky blue, and navy. The shoe features a perforated nubuck toe box, a suede mudguard, heel, and overlay, along with soft leather on the side panel for the classic Asics logo. The speckled midsole is brought together by a three tone outsole. Rounding out the “Cool Breeze” is the UBIQ Star logo on the sky graphic insole.The UBIQ x Asics Gel Lyte Speed “Cool Breeze” will be available 8/1/15 In-Store Only at our Moreland location.

ASICS has teamed with eclectic French fashion house Colette for this wild take on their Gel Lyte III silhouette. The polka dot heavy shoe features colette’s signature coloring of blue and white with varying polka dots throughout, while a white midsole, clear rubber heel, and leather lining complete the look. The colette x ASICS collaboration is now available in store in limited quantities.

Purchase the colette x ASICS Gel Lyte III in-store only via our Moreland Ave. location. Phone orders are also accepted by dialing 404.880.0402. Email orders are accepted by sending a size request to orders@wishatl.com. THIS ITEM IS SOLD OUT.

First making its initial debut in 1991, the classic Asics Gel Respector is revived once again in its “White” colorway. Sharing similarities to the Asics Gel Lyte III and Gel Lyte V, the Gel Respector flaunts a more streamlined profile, with a mixture of grey and teal. Finished with grey underlays beneath the stripes, the OG version of the GEL-Respector is available now online. Purchase link bellow.