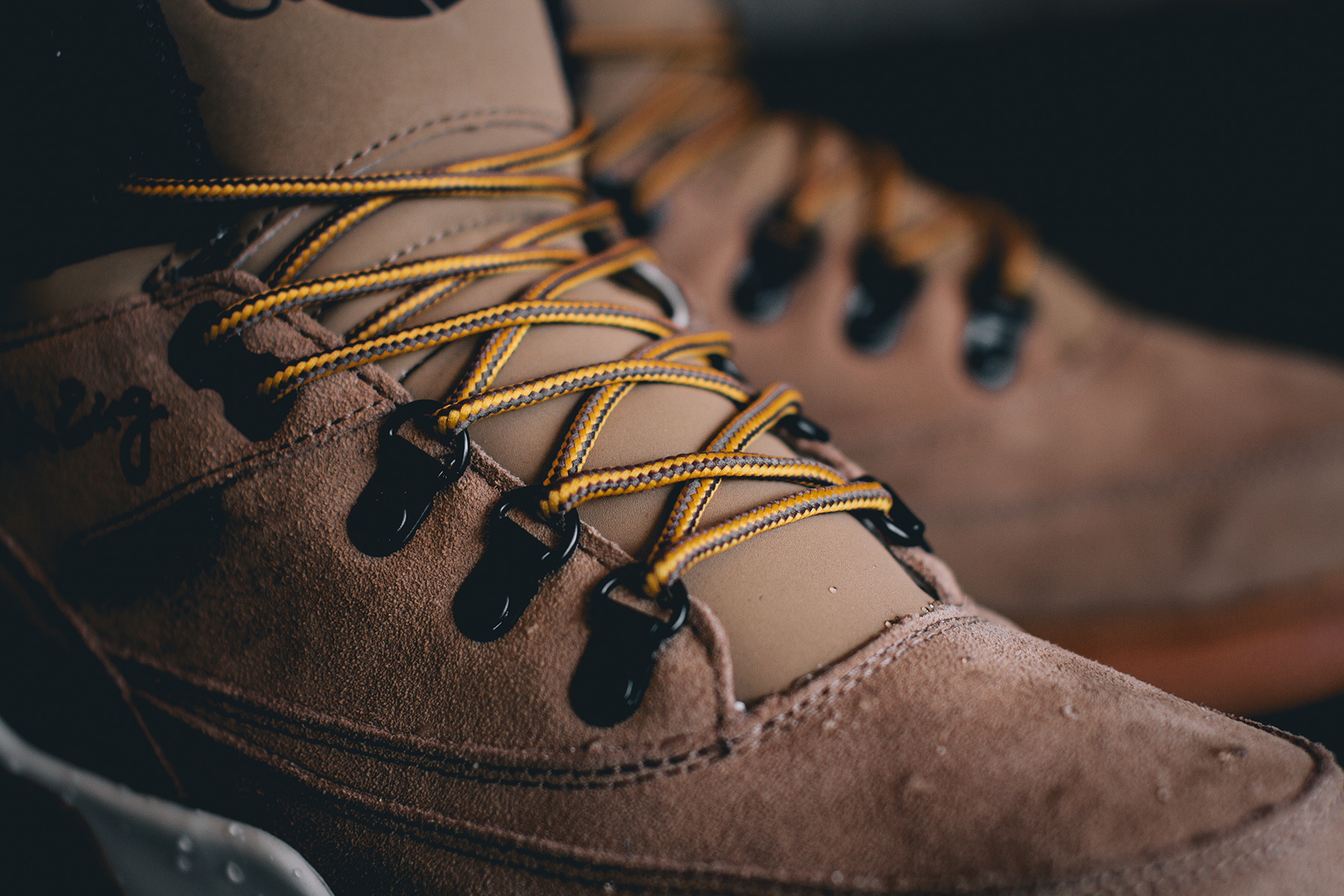 The flagship Ewing Athletics shoe, the 33 HI is an exact retro of the 1990 original, and features a classic reversible ankle strap that can be worn on the front or back of the shoe, and a full length PU midsole for cushioning. This special WINTER version has been upgraded and has premium Sand Waterproof Suede upper, along with metal D-ring eyelets and boot lacing. The interior features a waterproof lining to complete the silhouette. The winterized Ewing 33 Hi can now be picked up online and in-store at our Moreland Ave. location.

The 33 Hi gets a luxurious makeover with an all-white full grain leather on the upper and micro-perfed panels throughout. Additional style touches come by way of striped laces and heel straps, metallic faux gold detailing and a classic gum outsole. Each pair will come in a special edition co-branded holiday gift box.

After a slew of Ewing releases in 2015, the basketball legend is back with the next pair of releases just in time for Christmas. In this pack comes a black leather 33 Hi with a clean gum bottom, giving the silhouette a lifestyle appeal. Also a part of the pack comes a red and black version of the 33 Hi coming in a smooth suede. Both sneakers are equipped with the quality you come to expect with Ewing sneakers and are a fresh take on the 90’s retro. Both of these drop on December 18th, in the midst of holiday shopping.

Ewing Athletics is back with yet another retro sneaker that sneakerheads are sure to love. This time around, the signature Ewing silhouette sports a white upper, and a black midsole. Ewing branding is seen in large bold print on the heel and tongue, while the shoe is finished and wrapped with quality leather and seude. The sneaker will be available in-store only at our Moreland Ave. location at noon on Friday, June 17th.

Ewing Athletics continues to retro previous models by recalling its popular 1992 Concept Hi sneakers for a 2015 spring release. The brand is set to reissue both the 33 Hi “1985 Draft Lottery 30th Anniversary” & The 33 Hi “Triple White” and an additional Rogue. The white leather upper is meant to evoke memory of the white envelopes that the NBA used to pick drafts in the past, while the blue “1985″ embroidery on the heel pays tribute to the very year the retired NBA Hall of Famer was drafted as the number one overall pick for the New York Knicks, while the “Triple White” sports an Off-white hints at the collar and ankle strap add a sense of luxury to this pair. Be on the look out for all three pairs to be released this Friday (06/05/15) online and in-store at our Moreland Ave. location.

Looking to add to its growing list of retros, Ewing Athletics is getting ready to bring back its classic Concept model. Taking a classic from 1992, the high-cut gem is getting ready to be brought back in OG fashion. Seen here in both its Black/White and Knicks-inspired makeups, each upcoming retro is jam-packed with 90s flavor. Be on the look out for the Ewing Concept Hi Releasing this weekend online and in-store.

Just in time for the new year Ewing Athletics brings in heat to start out the year.  The latest Ewing 33 Hi features a Gray Gradient in what they’re calling “Graydient”. Starting with the lightest touches of grey ont he tongue and strap, each panel features a darker shade until the outsole is an ominous black. Check out a full look at the latest Ewing 33 Hi and let us know what you think of this clever ‘Gray’dient callout by penning your thoughts in the comments section.

Ewing Athletics are set to release their much anticipated Holiday collection comprised of its notable retros. Featuring the Rogue in a black and purple colorway, accompanied by two 33 Hi’s in Black/Yellow and Red/Black/White. Be on the lookout for the Ewing Athletics 2014 Holiday Collection coming soon at Wish.

With a full collection that includes the 33 Hi, Focus, Wrap, and Center silhouettes, Ewing Athletics goes Rogue for its latest signature rendition. Anticipating on a Halloween drop, Ewing doubles up its efforts with a Shadow-Dream Blue and a Red-Pewter colorway. Primed in its original color scheme, a white leather base gets paired with shadow and dream blue accents while the pair is based in black nubuck, bold hits of red light up the accents and a gradient featured as well. Be on the look out for the Ewing Athletics 2014 Ewing Rogue coming soon at Wish.

Ewing brand is geared up for a much anticipated Fall Collection offering two styles from Patrick’s retro line. Featuring the “Red Nubuck” Center Hi, the Black/White/Gum 33 Hi, and a second drop of the original Blue Suede 33 Hi. Highlighting the collection are the new looks for the Center Hi, feauturing a eye-catching red upper accented with black and white, along with the clean new black nubuck 33 Hi with white leather detailing a gum rubber outsole. Making its second appearance, the OG suede 33 Hi will also be restocked if you missed it the last time around. Be on the look out for this Ewing Athletics 2014 Fall Collection coming soon to Wish.

Ewing brand is geared up to have an explosive ending of Summer 2014. After its endorser was spotted wearing multiple makeups of his signature sneakers while coaching the Charlotte Hornets in the Vegas Summer League, Ewing Athletics has a full slate of releases that are ready for August. Led by a Hornets-inspired rendition of the low-top Ewing Wrap, the Georgetown Ewing 33 Hi, and the bright blue Ewing Center. Be on the lookout for this pack coming soon at Wish.

The brand made famous by the New York Knicks cornerstone, Patrick Ewing is back and ready to attack the summer in style. Presenting their latest silhouette, the Ewing Wrap Retro comes in two bold colorways. The retro model comes complete with perforations on the medial and lateral panels as well as oversized Ewing branding on the heel.

On the way from everyone’s favorite nostalgic shoe brand are the new colorway of the Ewing 33 Hi. Consistent with the usual dominant 33 Hi construction, the model sees a “Jelly Bean” green colorway. The Jelly Bean green color scheme sees an alternating green and sparkling orange on the logo and eyelet. Completed by the bold Ewing ankle strap, this shoe will be available soon at Wish.

Written by Julie Hogg on February 19, 2014. Posted in Lifestyle, Product.

Ewing Athletics is back in Spring 2014 to drop of a new trio of releases, with each of the big three models that have retroed up to this point represented. The first release in the pack is the Ewing Focus, built in a bold red suede, followed by the Ewing 33 Hi in black suede with white hits located on the oversized tongue, heel straps, and outsole. Rounding out the range is the Ewing Guard in a Knicks-friendly orange suede build with accents of royal blue. Be on the look out for this pack to be hitting the shelves at Wish soon.

Written by Julie Hogg on November 22, 2013. Posted in Lifestyle, Product.

After already seeing the “Purple Suede” Ewing 33 Hi release earlier this month, Ewing Athletics still isn’t finished with its share of colorful color combinations. The Ewing Athletics Ewing Guard “Sparkling Grape” sees a mix of sparkling grape, scuba blue and vibrant yellow atop its suede construction, making it easily the most interesting colorway from Ewing yet. Sure to be a limited release, be on the lookout for this sneaker releasing soon at Wish.

Written by Julie Hogg on October 4, 2013. Posted in Lifestyle, Product.

Since making its return earlier this year, Ewing Athletics is back to being one of the biggest names in footwear. Not to be outdone in the Fall season, the Ewing brand is releasing a new collection. Consisting of three pairs of shoes, the collection sees two colorways of the Ewing Guard in Blue and a new colorway, dubbed “Mustard.” Also in the pack is a White/Gum Ewing 33 Hi, a new colorway for the model. Ewing fans should be on the lookout for this collection releasing soon online and in-store.

Written by Julie Hogg on August 3, 2013. Posted in Lifestyle, Product.

Purchase the Ewing FOCUS releases here as well as in-store via our Moreland Ave. location.

While many professional basketball players were partnering up with large companies to produce individual sneakers, in 1989, Patrick Ewing became the first NBA player to offer his own brand of sneakers, Ewing Athletics. However, last year saw the first release in 17 years from Ewing Athletics with the relaunch of the Ewing 33 Hi. Now, after the successful releases of this model in multiple colorways such as the “Jamaica” and “Georgetown”, Ewing Athletics is back with the release of a fresh model, the Ewing Focus. Unlike the 33 Hi, the Focus boasts its signature ankle strap with “FOCUS” boldly embroidered at the front as well as red neoprene on the quarter panels and ankle as highlights. This, just the second model to be released/retroed by Ewing Athletics, will have a limited release of only 33 accounts worldwide.

The release date of the Ewing Athletics 2013 Ewing Focus has been changed. Further information regarding the time of sale for these will be announced at a later time.

We usually don’t do this, but starting Saturday May 4th, we will be restocking both the Ewing 33 Hi “Jamaica” and the Barkley Posite Max:

Original build and colorways are two features that made the Ewing 33 Hi a hit when it returned in retro form. However, Ewing Athletics took things back to its namesake’s roots for the new “Jamaica” and “Georgetown” color schemes. Born in Kingston, Jamaica, it’s only right we see Patrick Ewing’s most famous shoe brought back in a white, black, green, and yellow makeup. A Jamaican flag on the heel counter of the mostly white shoe provides a finishing touch, while the “Georgetown” colorway pays homage to Ewing’s days dominating the paint as a young Hoya center. Navy and grey color interchange through the upper and the midsole to keep the honorary shoe true. Both sneakers release in limited quantities at Wish this Saturday, March 30.