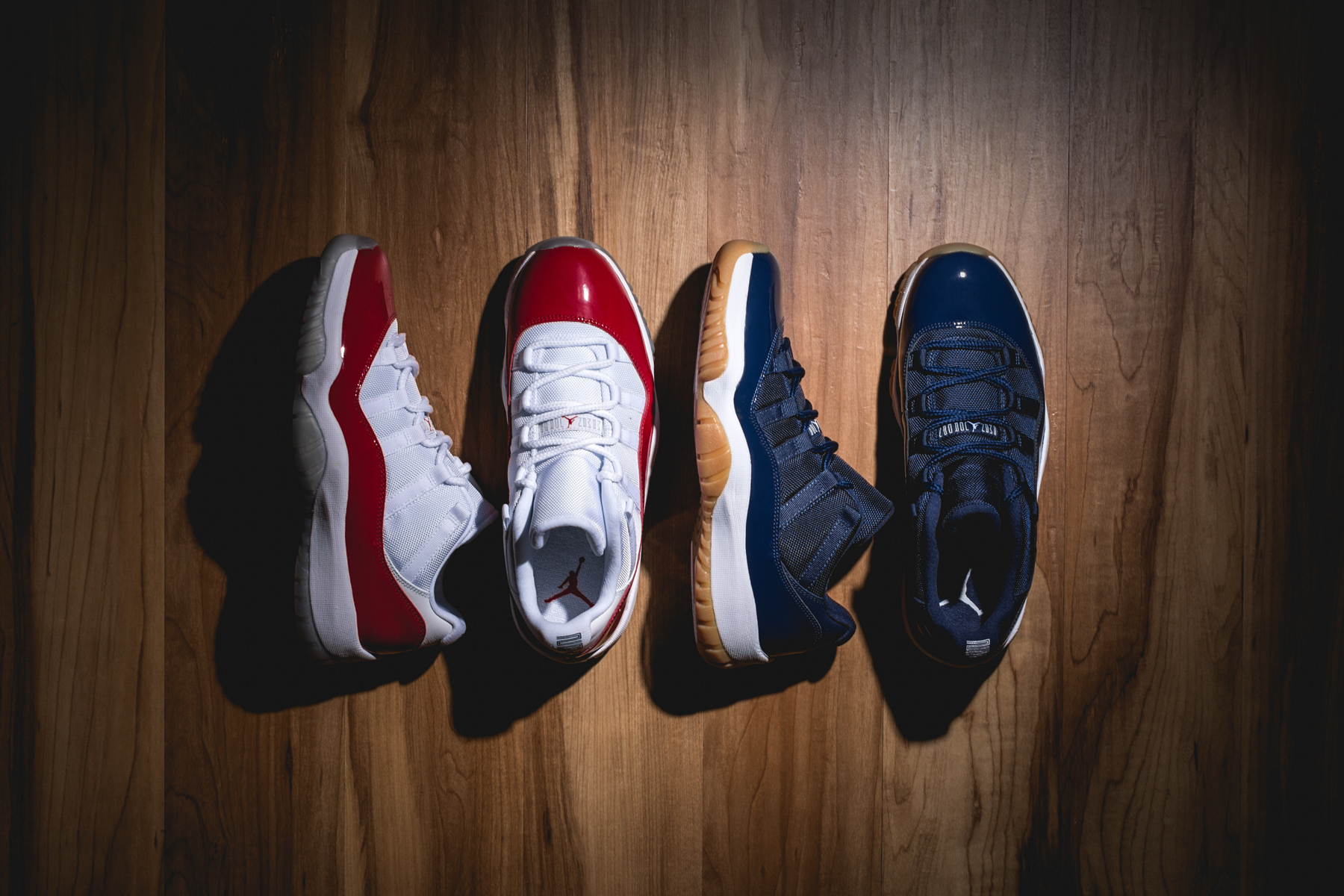 Its about that time of the year for Air Jordan 11 Low’s to drop, and with this years release, Jordan Brand does not miss. Bringing back a classic Varsity Red colorway, and pairing it with an all new Midnight Blue rendition, this pack sees clean colorways on a clean silhouette. The Midnight Blue opts for a gum midsole, while the Varsity Red gets an icey blue treatment. Don’t sleep on these when they release this Saturday, June 4th.

Nearly 20 years after its original release, Jordan brand is ready to bring back the white/cobalt colorway of the retro Jordan 11 silhouette. Elephant print detailing is seen on the shoe along with a cobalt colored Jumpman logo on the tongue. A leather upper and icey sole complete the shoe. This will be the first time this colorway has been released since its orignal release in 1996, so you won’t want to miss this one. Look for the sneaker to release this Saturday, August 1st, in-store only.

Jordan Brand shows more love to the ladies, by bringing back this women’s Air Jordan 11 Retro Low. Known as the “Citrus” edition, they come in a white and citrus colorway. Featuring a white-based upper, finished off by a citrus orange translucent outsole. Be on the look out for the Air Jordan 11 Retro Low GG “Citrus” releasing this Saturday in-store at our Moreland Ave. location.

Regarded as one of the best Air Jordans ever, the classic has become a legend. Released in 1996 by Tinker Hatfield, the Air Jordan XI “Legend Blue” were the pair that Michael wore durring his first NBA All-Star Game back from his retirment. Featuring a mix of patent leather and smooth leather in all white, witha tongue tag, Jumpman logo and translucent outdolr tinted in Legend Blue. Available 12.20.14 in-store only at our Moreland Ave. location

The Air Jordan 11 is certainly one of the most iconic Jordan sneakers of all time. Worn on foot by Michael Jordan himself during the 1996 Championship Parade, this particular model is designed with a bellow-ankle build. Featuring the exact performance and design elements of the original-patent leather with mesh uppers, carbon fiber and subtle pops of Concord.

Sure to be one of the hottest releases of the summer, The Air Jordan 11 Retro Low returns with a simple White/Black colorway. Also dubbed the “Tuxedo” or “Reversed Concord”, this sneaker features black nylon mesh along the top portion of the upper, with white patent leather on the base. Hints of red are seen on the heel, while an icy blue sole rounds out the look. With a June 8 release date, these shoes will be available at Wish in-store or by phone/email order for $140 USD.

Phone Orders are offered via 404.880.0402 and placing an order with a sales representative.

Email orders are accepted by contacting orders@wishatl.com with a size request.

Mark your calendars, because on March 23rd, 2013  the Air Jordan 11 “Breds” will restock at Wish for $185. Arguably one of the most sought after releases of 2012, the iconic Black/Varsity Red Air Jordan 11 will be available at Wish among a few other select stores. Take a look below at some images of the classic release below: