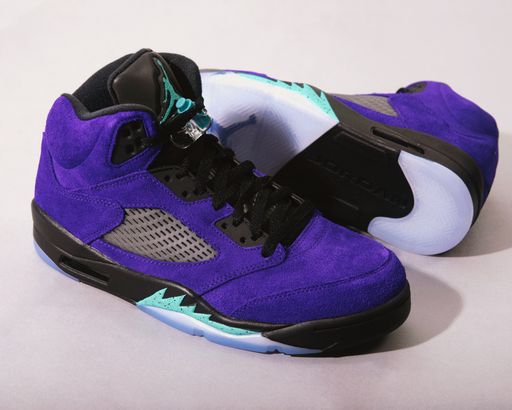 The Jordan 5 made its first appearance in 1990 with three OG colorways: black/metallic silver, fire red/white & grape ice/white. The Jordan 5 is just as popular now as it was three decades ago, but the grape colorway stand solo as the only look that strays away from a team-oriented color scheme. Since the integration of purple in the Jordan 5, we’ve seen it in various way in the past, but never like this.

The deep purple suede covers the entire upper, with complimenting black accents along the tongue, laces, mudguard & sole. There are also a couple of contrasting splashes emerald green that helps to bring the whole look together.

Sign up for the raffle here, entries close Monday July 6 at 4pm! 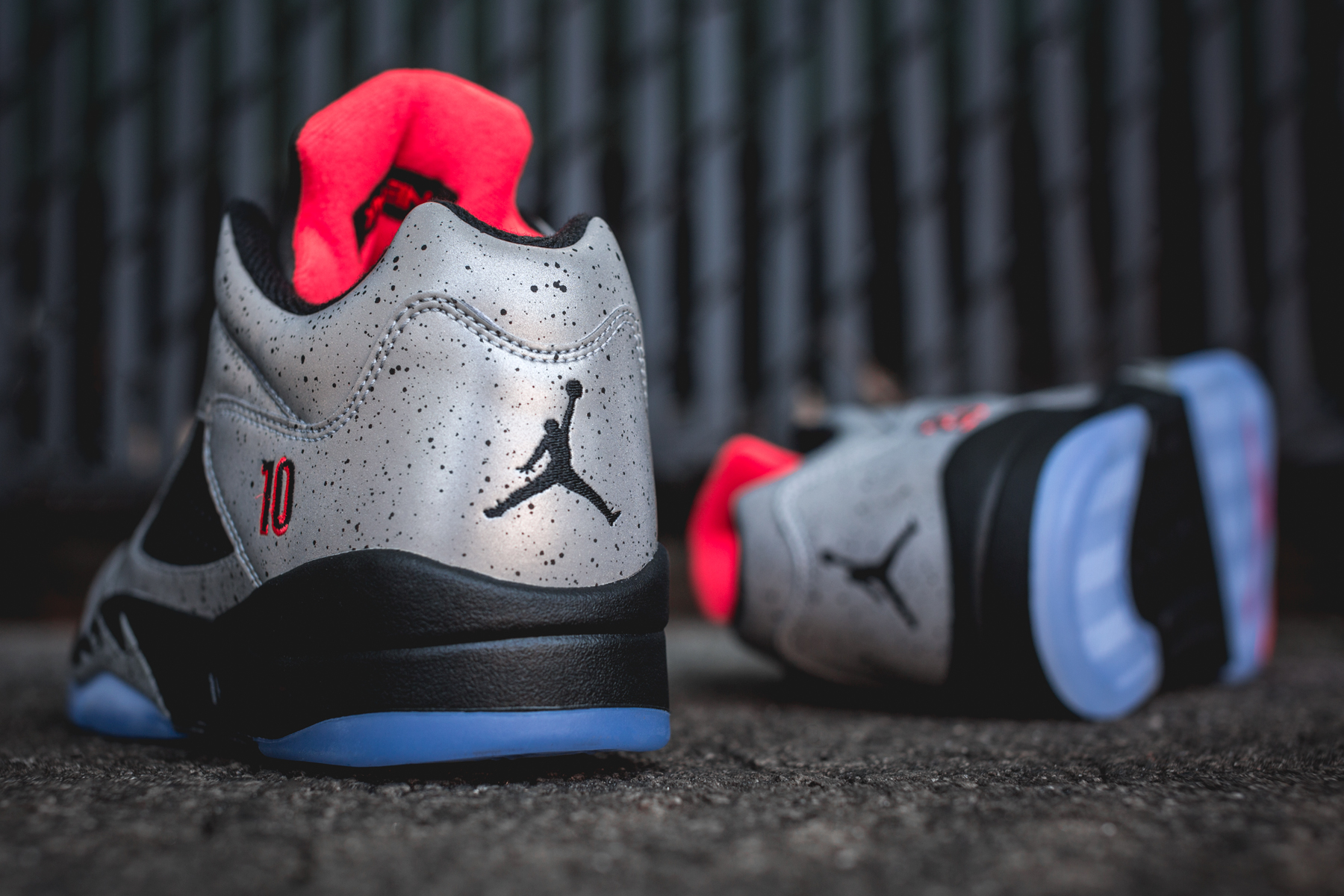 Although Jordan Brand has its origins in basketball, the label shares one thing in common with the sport of soccer; emphasis on greatness and success. For Jordan Brands next big release, they take one of soccers greatest, Brazilian star Neymar, and give him his own Air Jordan 5. This one is surely one of a kind with its all over dark grey reflective upper, offset by hints of infrared. Neymars number 10 meets Jordan’s number 23 with their numbers on each heel. Look for the Brazilian soccer stars first Air Jordan to release this Friday, June 3rd. 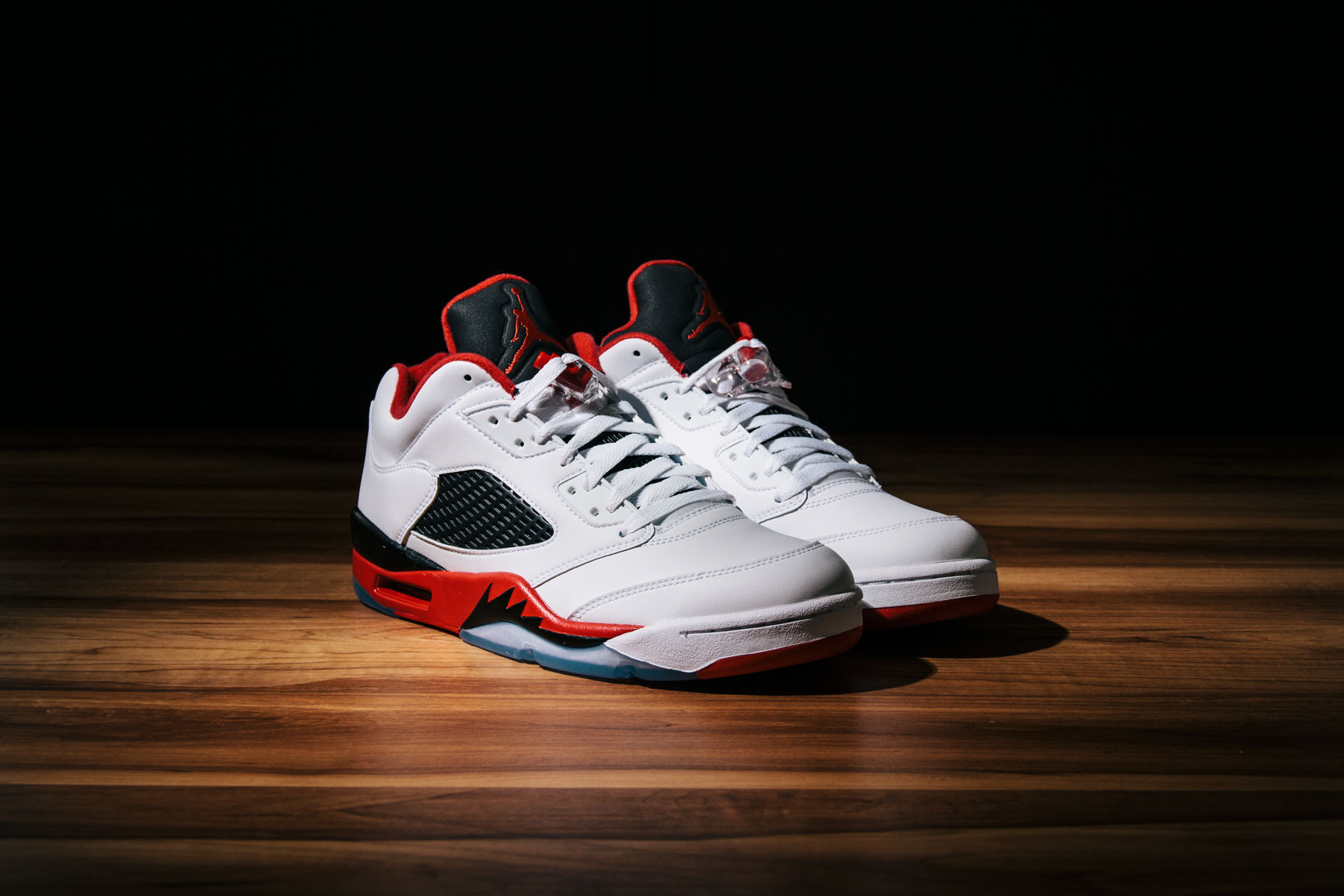 A classic Air Jordan V color makes its debut on the Jordan 5 Retro Low. With premium white leather uppers and Fire Red accents, the black tongue and mesh details make this a perfect entry for summer low top style. Look for this Air Jordan in its classic make up to drop this Saturday, March 12th. 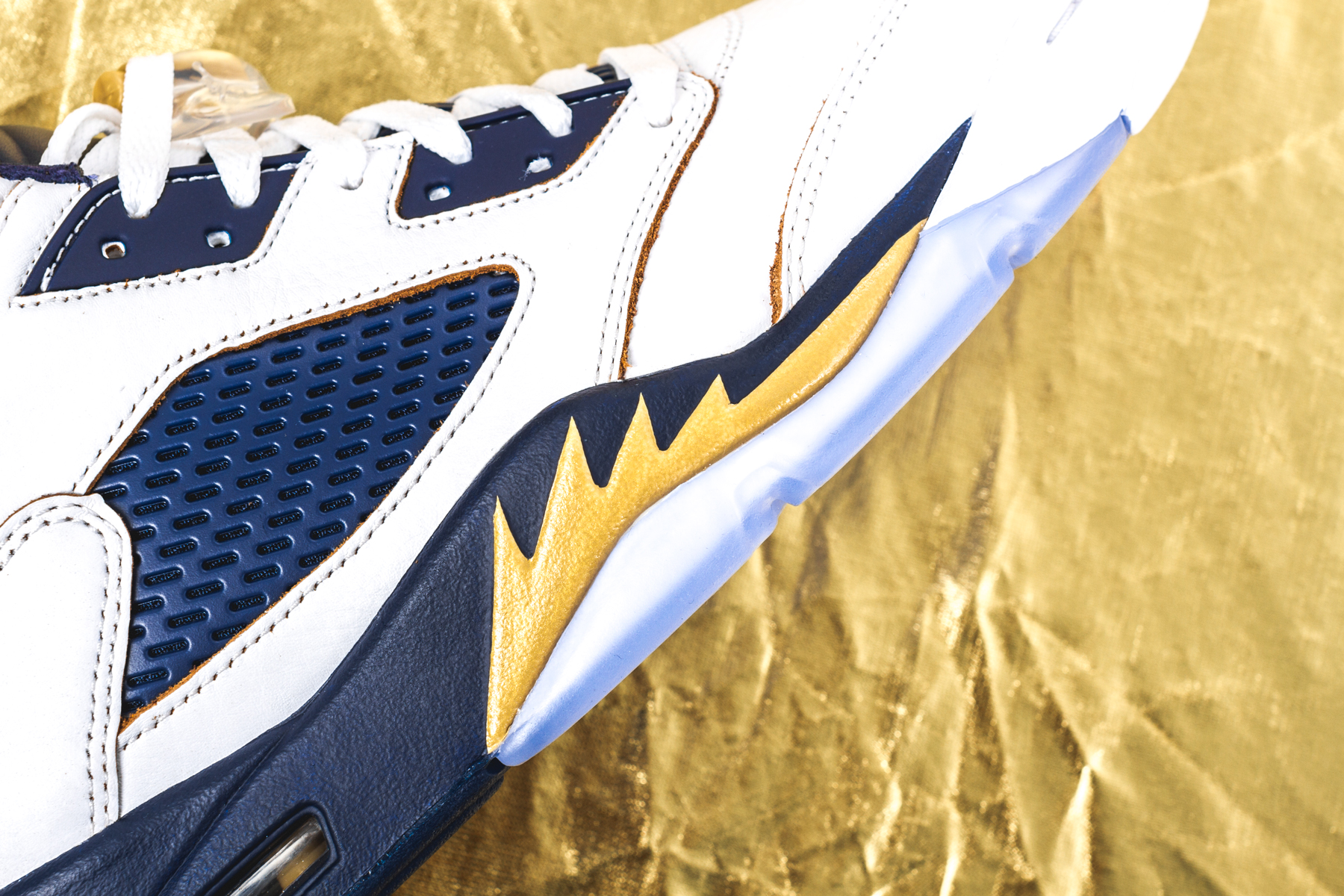 Inspired by flight, here comes the next in a string of Air Jordan 5 low releases. Dressed in a Marquette-esque color combination, with its navy blue and gold hues, this release features a premium white leather upper. The Jumpman logo is visible on the heel and the tongue, while a gold and clear lacelock help to complete the detailing on this one. Look for this release, said to be inspired by vintage flight goggles, to release this weekend, February 20th. 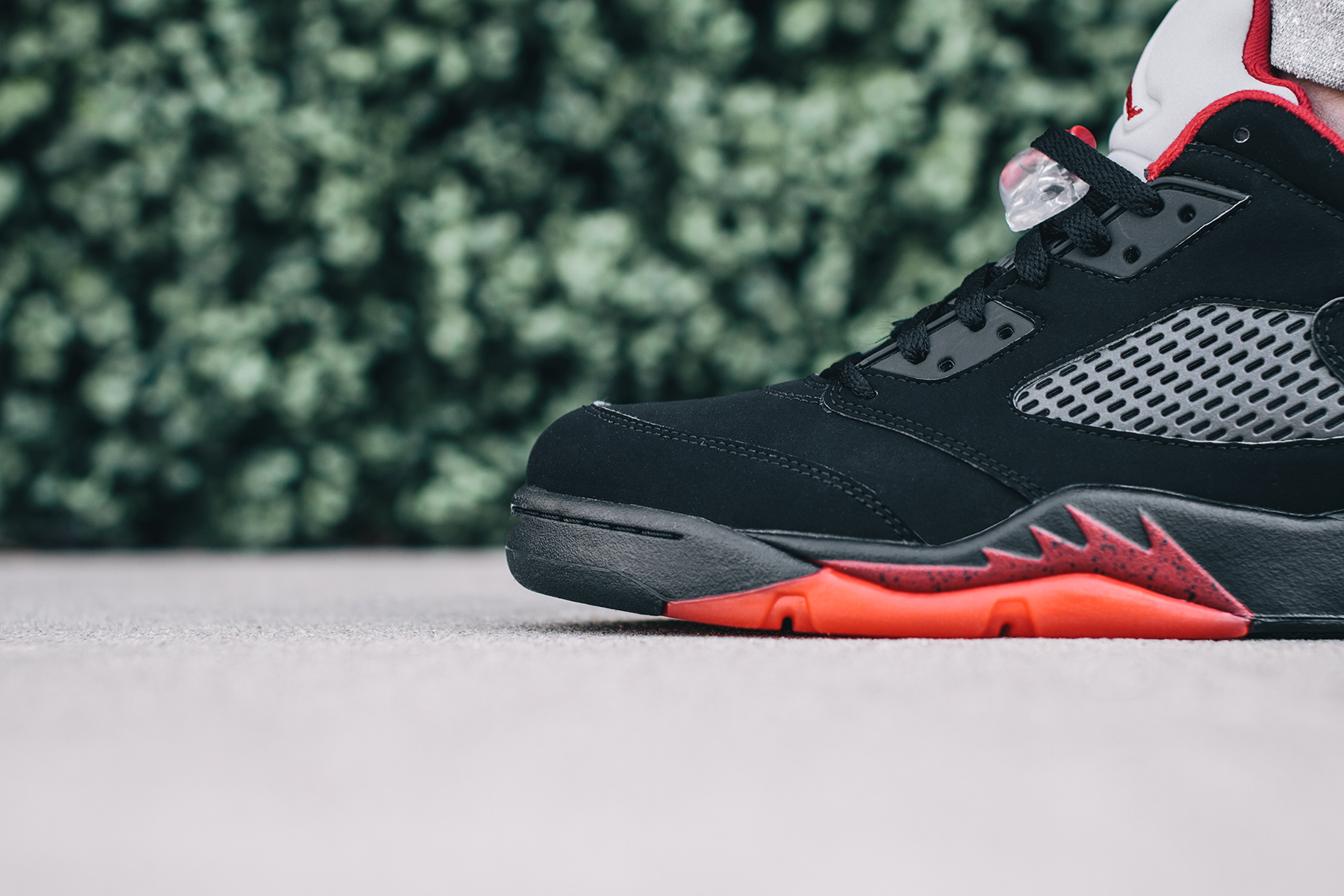 After a few low renditions of Air Jordan releases such as the Air Jordan 4 and Air Jordan 1, Jordan Brand is back with a rarely seen Air Jordan 5 Low. Taking a colorway that could’ve been taken out of the early 90’s, the sneaker features a Black/Metallic look, while trading the translucent misole for a bright Gym Red adding some pop. All of the same Air Jordan 5 features are visible such as the lace locks notable to the silhouette. The Air Jordan 5 Low “Alternate” will release this Saturday, January 30th.

The next girls’ exclusive Air Jordan 5 Retro is heating up the road to summer. A predominately Wolf Grey upper is paired with neutral accents, topped off with a splash of Hot Lava. This pair also features two-tone Wolf Grey and Black laces. Be on the look out for the Air Jordan 5 Retro GG “Hot Lava” releasign this weekend 5/9/15 in-store at our Moreland Ave. location.

Originally released back in 2000, Jordan brand brings out the White/Metalic Silver-black edition back from the vault after 15 years of hibernation. With the remastered treatment, inverting the classic Black/Metallic Silver colorway and ditching that version’s red accents, the retro release comes decked out in tumbled white leather and pairs the upper with an icy outsole, a reflective 3M tongue, and metallic silver hits to the midsole and “23″ embroidery.

Written by Julie Hogg on September 16, 2013. Posted in Lifestyle, Product.

Having already released several versions of the Air Jordan Retro 5 this year, Jordan Brand take a break from the ordinary with the release of the Air Jordan 5 “3Lab5.” Completely different from any colorway combination ever seen, this shoe is wrapped in Jordan’s classic Elephant print with contrasting Gamma Blue and Purple seen throughout. Be on the lookout for these instant classics releasing soon at Wish.

Written by Julie Hogg on August 21, 2013. Posted in Lifestyle, Product.

Introduced just yesterday here at Wish, the Air Jordan Retro “Fear Pack” gets another addition with the Air Jordan Retro 5 model. Unlike the Jordan 4, this silhouette gets a bit more color, draped in a mostly Olive Green treated leather material. With the upper sitting atop a bright Olive Green to Black gradient sole, this shoe also sees hits of red speckled throughout as well as the Jumpman logo on the tongue, giving it a sinister flare. The Air Jordan Retro 5 “Fear Pack” will be releasing soon, but until then, take a look at the upcoming release below:

Stay tuned for more info, but the Jordan 5 Retro Black/Metallic Silver will be releasing from our Moreland Ave. shop on August 20, 2011, for a retail of $150.  Clean…

In honor of the Jordan 5 Retro release tomorrow (and freedom), we’ll be releasing a limited run of what we’re calling the Wish “Independence Day” tee.  Inspired by the iconic J’s, the shirt features the white speckled shark teeth that is so recognizable from the 5 outsole.  Retailing for $28, the tee will be releasing in-store on the day of the Jordan release, July 2.  It will be available in-store starting at open, 12:00 noon est and at midnight July 2 in our online shop.

Rocksmith introduces their “Kickstrike” program this July with the release of multiple colorway tees to pair with the Jordan 5 “Independence Day” kicks.  Perfectly, pantone-matched and paired up with the upcoming shoes that drop on Saturday, all four tees are now available in-store only from our Moreland Ave. Shop.  You can pick up the “U Already Know” tees for $28 each and the “Footwork” tees for $28 as well.  Judging by the attention around the Jordan 5 release, these tees will certainly sell out fast as well so don’t sleep.  Phone orders are welcome by calling 404.880.0402 ext #1.

There are plenty of things to celebrate this Fourth of July Weekend…. family, freedom…. and kicks.  Starting you off on the right foot (literally) this summer, Nike and Jordan are slated to release two big shoes on Fourth of July Weekend.  Starting on Friday, July 1, the Nike Air Foamposite “Retro” will be dropping in-store at our Moreland Ave location.  Retail is set at $190.  The following day, the Jordan Retro 5 (V) will be releasing in a “Independence Day” colorway on Saturday, July 2, 2011.  Retail for the Jordan 5 is set at $150.